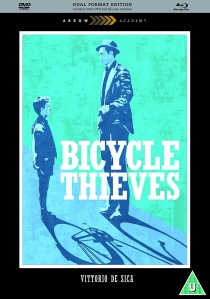 News
News Article Go back to homepage
Heralded as the greatest film ever made on release, Bicycle Thieves, released on DVD and Blu-Ray by Arrow Films on 18th April 2011, has had an impact on cinema worldwide from release to the present day.
Giulio Chiari, Gino Saltamerenda, Elena Altieri, Lianella Carell, Enzo Staiola, Lamberto Maggiorani
Vittorio De Sica
Vittorio De Sica, Giuseppe Amato
Arrow Films
1 hour 29 minutes
18/04/2011
Thank you for supporting DVD365.net when you order using the link(s) below. As an Amazon Associate we earn from qualifying purchases
Buy DVD
Buy BD
Information

Heralded as the greatest film ever made on release, winning an Oscar in 1949 and topping the Sight & Sound film poll in 1952, De Sica's seminal work of Italian neorealism has had an impact on cinema worldwide from release to the present day, with filmmakers such as Satyajit Ray and Ken Loach claiming the film as a direct influence on their own.

Bicycle Thieves tells the story of Antonio, a long unemployed man who finally finds employment putting up cinema posters for which he needs a bicycle. His wife pawns all the family linen to redeem the already pawned bicycle and for Antonio salvation has come, until the bicycle is stolen. Antonio and his son take to the streets in a desperate search to find the bicycle.

Bicycle Thieves is as much about the position of Italians in post-War, post-Fascist Italy as the relationship between father and son, told through the labyrinth of the cinematic city with De Sica's arresting visual poetry. Defining neorealism, a small period of filmmaking that focused on simple, humanist stories, Bicycle Thieves was one of the most captivating and moving.

Arrow Academy presents Vittorio De Sica's masterpiece on Blu-ray for the first time in the UK.

UHD
One of the most compelling and conflicted characters in Sony Pictures Universe of Marvel Characters comes to the big screen as Jared Leto transforms into the antihero Michael Morbius as Morbius is released on 4K Ultra HD, Blu ... END_OF_DOCUMENT_TOKEN_TO_BE_REPLACED
Top PicksView