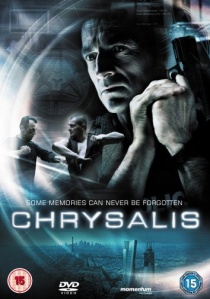 The conflict results in a tense Mexican standoff, during which Nicolov brutally murders Sarah before escaping. His life shattered and now driven only by his need for vengeance, Hoffman is partnered with rookie officer Marie Becker (Marie Guillard), who assists him in his vigilante quest to track down Nicolov. Their joint investigation into Nicolov's current whereabouts uncovers a human trafficking ring and a succession of victims, both dead and alive, all bearing similarly scarred eyelids. Eventually, the trail leads them to Brugen's clinic, where the professor is employing her advanced medical techniques and recovered memory therapies in the recuperative treatment of her injured daughter. But what is the connection between Professor Brugen and Nicolov?

One of the most stylish and accomplished debut sci-fi movies in recent years, Leclercq's visionary representation of a near-future Paris is as impressive and believable as it is chilling. A gripping thriller with cyber-punk undertones, Chrysalis also features several explosive, close-combat fight sequences designed by celebrated stunt co-ordinator Alain Figlarz (The Bourne Identity), who also stars as Nicolov, the ruthless villain at the centre of the film's mystery.

HotUHD
A decade-defining classic from the imagination of Steven Spielberg and Chris Columbus, celebrating its 35 year anniversary, The Goonies is released on 4K UHD 31st August 2020 from Warner Home Video. END_OF_DOCUMENT_TOKEN_TO_BE_REPLACED
Top PicksView