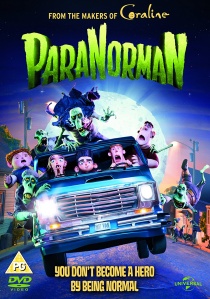 From the creators of Coraline, brand new animated film ParaNorman follows the mystical adventures of Norman Babcock, a misunderstood boy with an unusual paranormal gift. Follow his journey as he fights to save his hometown, Blithe Hollow, from a centuries old curse, as ParaNorman is released on 3D Triple Play Blu-ray & DVD with UltravioletT and Digital Download on 28th January 2013 courtesy of Universal Pictures (UK).

Norman (voiced by Kodi Smit-McPhee, The Road) is a regular boy, with the unique ability to see dead people. Attracting ridicule from his family and schoolmates, he leads a lonely existence until he meets best friend Neil (Tucker Albrizzi, Good Luck Charlie). After receiving a deadly warning about the future of Blithe Hollow from his ostracised Uncle Prenderghast (John Goodman, Monsters Inc.), he takes it upon himself to try and save the day.

Joined by Neil, his vapid sister Courtney (Anna Kendrick, Up in the Air), Neil's brother Mitch (Casey Affleck, The Assassination of Jesse James by the Coward Robert Ford) and school bully Alvin (Christopher Mintz-Plasse, Superbad) they fight a range of ghouls in a battle that pushes even Norman's paranormal abilities to their limit.

Watch in awe at ParaNorman's amazing features, as it is only the second stop-motion animated feature to be made in 3D and follows Laika's groundbreaking Academy Award-nominated film Coraline. With special features to recreate and enrich the ParaNorman experience, including deleted scenes, prepare for a ghostly journey into Blithe Hollow.

Related Articles
End of Watch, Pitch Perfect 3, The Accountant, Mr Right, Trolls, Mike and Dave Need Wedding Dates, Get A Job, Pitch Perfect 2, The Voices, Cake, Into The Woods, End Of Watch, Fear Itself: Series 1, 50/50, Scott Pilgrim vs. the World, Up In The Air, A Simple Favour, The Day Shall Come, Trolls World Tour, Scott Pilgrim Vs. The World, Trolls: Holiday in Harmony
A Ghost Story, Manchester by the Sea, Triple 9, Out of the Furnace, Tower Heist, Good Will Hunting, Ocean's Eleven, The Old Man and The Gun
Trolls, Dragons: Riders Of Berk - Part 1, Fright Night, Marmaduke, How To Train Your Dragon, Year One, Superbad
Rio, How to Be Single, Vacation, The Other Woman, Rio 2, This is 40, The Change-Up, Rio, Funny People, Knocked Up, Big Daddy, Knocked Up, Blockers, Welcome to Marwen, Motherless Brooklyn, Blithe Spirit, The Croods: A New Age
Slow West, Bad Land: Road To Fury, The Congress, Dawn of the Planet of the Apes, Romeo & Juliet, Let Me In, The Road, Alpha, X-Men: Dark Phoenix, Chronical: 2067, The Power Of The Dog: The Criterion Collection
Flushed Away
Spooky Buddies, SiCKO
Missing Link
Comments
DVD Releases News Pick