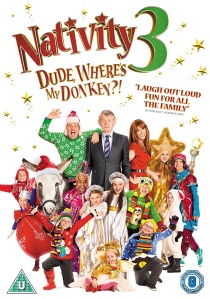 This Christmas the pupils of St Bernadette's and their much-loved, madcap teacher Mr Poppy (Marc Wootton) are back for their biggest adventure yet involving fantastic flashmobs, excitable elves, Christmas carols and of course Archie the donkey!

When their new teacher Mr Shepherd (Martin Clunes) loses his memory and forgets all about Christmas, as well as his fiancée Sophie (Catherine Tate) and the whereabouts of the beloved Archie, it's up to the pupils of St Bernadette's to save the day.

Led by the ever enthusiastic Mr Poppy, they embark on a Christmas journey like never before - but time is against them if they are to help Mr Shepherd get to New York in time for his magical yuletide wedding...!

Written and directed by Debbie Isitt and produced by Nick Jones, Nativity 3, released on DVD and Blu-ray by Entertainment One on 2nd November 2015, once again stars Jason Watkins as the competitive Gordon Shakespeare and introduces Celia Imrie as the new Headteacher, with Adam Garcia as the scheming Bradley Finch and Ralf Little as Sophie's brother.