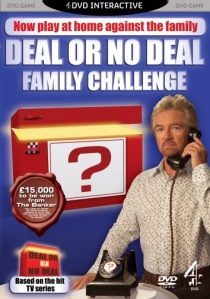 Deal or No Deal: Family Challenge

News
News Article Go back to homepage
After revolutionising the interactive DVD genre with its debut release last year and setting new records as the highest-selling DVD game of all time, Deal or No Deal returns with the Family Challenge, released by 4DVD on 19th November 2007, in a new and improved game for players to test their wits against The Banker.
4DVD
Unknown
19/11/2007
Thank you for supporting DVD365.net when you order using the link(s) below. As an Amazon Associate we earn from qualifying purchases
Buy DVD
Information

After revolutionising the interactive DVD genre with its debut release last year and setting new records as the highest-selling DVD game of all time, Deal or No Deal returns with the Family Challenge, a new and improved game for players to test their wits against The Banker. Featuring a range of innovative additions to the format, fans of Endemol's award-winning game show on Channel 4 can now personalise their game and take on their family and friends!

Introducing brand new game play, in a first of its kind feature the Deal or No Deal Family Challenge interactive DVD game allows players to join forces with family and friends to beat The Banker. With options to play solo, take the Family Challenge or test their nerves against The Banker, players will ride a roller coaster of emotions to prove they can make the right deal - at the right time.

Released by 4DVD on 19th November 2007 and featuring exclusive unseen studio footage, Deal or No Deal host Noel Edmonds guides players through each stage of the game. Those playing at home can now chose their own box, ask advice from favourite contestants, ask The Banker a question or for an insightful poem, as well as trying out the brand new lucky dip feature. With 22 identical boxes and a quarter of a million pounds at stake - it's a walk of wealth towards Deal or No Deal in the brand new Family Challenge.

With game play identical to the TV show, each sealed box contains an amount ranging from 1p to £250,000. It's a mystery how much money is in any of these boxes, but somehow players must try to find the smaller amounts of money in the boxes, keeping the larger amounts in play as long as possible. Both Noel and the other contestants urge players on to beat The Banker - but will they hold their nerves as boxes are selected for elimination one by one?

After each round, The Banker offers up cash to buy back a box. Along the way fellow contestants are at hand to offer advice and support, all at the click of a button. The challenge is on to see if players are brave enough to hold on to find if the jackpot's in their box - or will they play safe, making a deal with The Banker to leave the game?

As a cult TV phenomenon Deal or No Deal has proven a major hit on Channel 4, achieving audiences of up to 4.5 million viewers and recently celebrating its 500th show on 29th June 2007. Deal or No Deal's white-knuckle success has also secured over 60 deals with broadcasters worldwide, bringing the game into homes in over 100 territories.