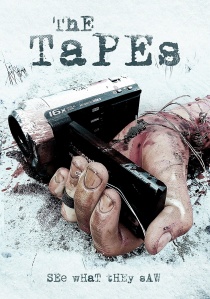 A gritty, urban teen horror that takes its "found footage" cue from the likes of The Blair Witch Project, REC andThe Zombie Diaries, The Tapes adds a rare and chilling sense of realism to the proceedings thanks to utterly convincing performances from its excellent young cast and fine location work that suggests the horror really could happen here.

In the winter of 2008, three teenage friends, Nathan (Oceng), Gemma (Sparkes) and her boyfriend Dan (Maza), visited Whitstable, Kent to shoot location footage for Gemma's showreel and her Big Brother TV show audition video. While filming in one of the area's many pubs, they briefly encountered a local farmer and were later informed by the barmaid that the man was a harmless 'swinger' who regularly hosted sex parties at his nearby farm.

Seeing an opportunity to make some easy money by breaking into the farm to secretly film one of the parties and then selling the bootleg DVDs for cash, Nathan and Dan convinced Gemma to accompany them by promising to finish her showreel at the same time. But things soon began to turn extremely sinister when the farmer and his guests began arriving at the farmhouse and the three friends found themselves trapped in a dingy barn as darkness fell.

These events and the horrific details of what happened next only came to light when the police discovered the videotapes recorded by Nathan, Dan and Gemma. Now, the families of the victims have allowed The Tapes to be shown to the public for the first time. What you will see documents the shocking and terrifying final hours of three teenagers who found themselves in the wrong place at the wrong time.