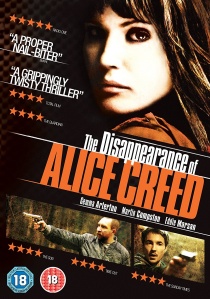 The Disappearance of Alice Creed (2009)

Icon Home Entertainment and CinemaNX announce the 4th October 2010 DVD and Blu-ray release of the 'grippingly twisty thriller' (Total Film) The Disappearance of Alice Creed; a critically acclaimed directorial debut from J Blakeson and featuring the biggest female star of 2010.

Starring Gemma Arterton (Quantum of Solace, Prince of Persia) as Alice Creed, the consistently excellent Eddie Marsan (Vera Drake, Happy-Go-Lucky, Me and Orson Welles/i}) as Vic and Martin Compston (Sweet Sixteen, Red Road) as Danny, The Disappearance of Alice Creed has been universally lauded by critics and fully cements Arterton's position as the most exciting actress of recent years.

On a suburban street, two masked men seize a young woman. They bind and gag her and take her to an abandoned, soundproofed apartment. She is Alice Creed, daughter of a millionaire. Her kidnappers, the coldly efficient Vic and his younger accomplice Danny, have worked out a meticulous plan. But Alice is not going to play the perfect victim - she's not giving in without a fight. In a tense power-play of greed, duplicity and survival we discover that sometimes disappearances can be deceptive...

Full of twists, intrigue and betrayals this British thriller was in the official selection at Toronto and London Film Festivals, with director J Blakeson receiving a 'Best Newcomer' nomination at the latter. The film was also nominated for the Raindance Award at the 2009 BIFA awards.

The DVD and Blu-Ray discs offer an exciting array of extras including a Director's Commentary, Making Of featurette and Selected Storyboards, with the DVD also featuring Extended Scene with Commentary. If you like your thrillers to be original, unpredictable and unbearably tense then seek out The Disappearance of Alice Creed.