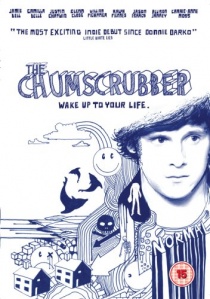 Brit favourite Jamie Bell is outstanding in satirical comedy The Chumscrubber out on DVD on the 17th September 2007 from Icon Home Entertainment. The debut feature film from director Arie Posin explores the fractured and fractious quality of lifestyle in suburban America with crystalline precision and exposes some of the hypocrisy in modern day culture.

With an all star cast including Billy Elliot's Jamie Bell, Glenn Close (Fatal Attraction, Dangerous Liaisons), Ralph Fiennes (Harry Potter, The Constant Gardener) and Carrie Anne Moss (The Matrix Trilogy), The Chumscrubber is a richly layered, thematically provocative story of a teenage boy fending off the evils of suburbia.

When Dean Stiffle (Jamie Bell) discovers the body of his best friend, Troy (Josh Janowicz), hanging in his bedroom, he doesn't bother telling any of the parents in his idyllic Californian neighborhood, figuring they wouldn't care. Kids and adults in Hillside live their lives entirely separately - and it is up to Dean to decide how and whether to negotiate these two worlds.

Following the death, Dean's classmates Billy (Justin Chatwin)), Crystal (Camilla Belle) and Lee (Lou Taylor Pucci) hatch a plan to kidnap Dean's younger brother and hold him to ransom to get their hands on Troy's stash of drugs. Unfortunately, the plan is foiled when they kidnap the wrong boy, whose disappearance goes unnoticed by his self-involved mother.

Omnipresent in the teenager's lives is the popular video game The Chumscrubber. In this postcard perfect neighborhood each character is pursuing a dream which they think will make them happy - be it prescription or illicit drugs, vitamin supplements, the perfect body, a fairytale wedding or New Age mysticism.

This story of suicide, teenage angst, high school drug dealing and young infatuations is a darkly humorous and satirical tale about life crumbling in the midst of the seemingly idyllic surroundings. The Chumscrubber combines comedy and tragedy in a work of uncompromising honesty that incorporates colourful characters, strong emotions and the most bizarre of twists.