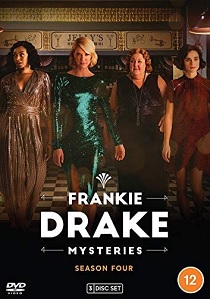 Set in 1920s Toronto, Frankie Drake Mysteries follows the city's only female private detectives as they take on the cases the police don't want to touch. In a time of change and hopefulness, their gender is their biggest advantage as they defy expectations and rebel against convention.

The Drake Private Detectives agency takes on cases that explore every cross-section of Toronto, from gospel church choirs, bathing beauties and the early cinema scene, to the homes and private parties of the city's elite. Frankie and Trudy's fearless sense of adventure gets them into all kinds of trouble, but they always manage to find a way out. They are new detectives for a new world - but is the world ready for them?

Frankie Drake Mysteries: Season 4 is released on DVD and Blu-ray 10th May 2021 from Dazzler Media.

DVD
Two lifelong friends find themselves at an impasse when one abruptly ends their relationship, with alarming consequences for both of them in The Banshees Of Inisherin, released on DVD and Blu-ray 30th January 2023 from Walt ... END_OF_DOCUMENT_TOKEN_TO_BE_REPLACED
Top PicksView