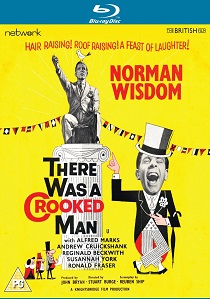 Unseen for over fifty years, this exceptionally rare feature sees comedy legend Norman Wisdom playing a naïve explosives expert who finds himself involved with a criminal gang after uncovering nefarious dealings by a prominent industrialist.

Hailed as one of Wisdom's finest films, it was one of two features he made independently, and marked a departure from his more familiar and endlessly popular comic creation, 'the Gump'. Co-starring Alfred Marks and Susannah York, There Was A Crooked Man was directed by BAFTA-nominated Stuart Burge.

Released on Blu-ray 30th April 2018 from Network, this long sought-after comedy gem is featured here in a brand-new transfer from the best available elements, in its as-exhibited theatrical aspect ratio.