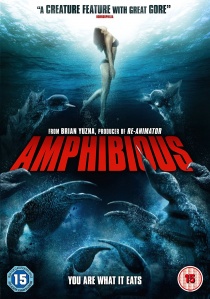 You are what it eats. Starring Janna Fassaert and Michael Paré, from the producer of Re-Animator, Brian Yuzna directs the horror Amphibious, released on DVD and Blu-ray on 5th May 2014, courtesy of Kaleidoscope Home Entertainment.

Setting out on a perilous expedition, Marine biologist Skylar Shane and boat captain Jack Bowman head towards the unknown depths of the North Sumatra sea in search of prehistoric life samples. Threat is rife as the pair encounter a dangerous band of smugglers accompanied by Tamal, a mysterious orphan child sold into servitude by an uncle rumoured to be a sorcerer and master of black magic.

Around Tamal, curious and treacherous events begin to occur while the clouds and ocean swirl with jeopardy as an ancient creature stirs deep in the water. Skylar and Jack must face the ferocity and terror of this unfathomable beast as one by one, smugglers disappear and harrowing screams pierce the waves.