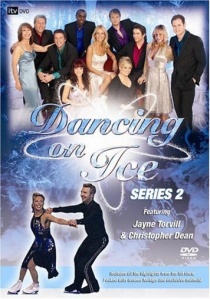 Easter Eggs are soooo last year - so why not tuck into the visual feast that is the hit entertainment show, Dancing on Ice instead? Bursting at the seams with lycra, toned torsos and perfectly formed buttocks, the Dancing on Ice 2, released by ITV DVD from 2nd April 2007, on is packed full of all your favourite celebrities getting to grips with the toughest and most dangerous dance challenge around.

Ice skating champions and world-famous duo Torvill and Dean are on hand for expert tuition as they coach the celebrities to perform even more daring and exciting skating routines. The celebrity skaters will also face being scrutinised by a frosty panel of expert judges, who aren't afraid to speak their mind, particularly everyone's favourite catty commentator - Jason Gardiner!

Featuring all the best highlights from the show, The Dancing on Ice 2 DVD is jam packed with extra footage for fans of the programme including unseen footage of the training sessions, the pre-show nerves and who was a natural on the ice - and who wasn't - in Ice Virgins. Plus there's the low-down on all the injuries and the chance to watch those embarrassing skating stumbles - over and over again! Does My Bum Look Big in This? takes a look at the fabulously camp yet unforgiving costumes that leave little to the audience's imagination, and Flying High goes behind the scenes on those death defying lifts. Kay the Comeback Kid features Kay's story, her thrills - and spills - and as well as her brave performance to Show Me Heaven following her headsmacking rehearsal beforehand and Torvill and Dean: The Story Continues offers another chance to see These Boots are Made for Walking with the whole cast.

A special winner's feature will have all the highlights of the final, plus their unforgettable winning performance of Bolero, a sneak peek at Duncan James unseen Bolero and exclusive interviews with Kyran Bracken and Torvill and Dean. Don't miss this celebration of sequins, stage fright and stunning dancing on ice, it's much more satisfying than hollow chocolate!

DVD
In Brian And Charles, released on DVD and Blu-ray 10th October 2022 from Mediumrare, an inventor lives alone in a remote village in the countryside, inventing useless things out of found objects in his garage. That is until ... END_OF_DOCUMENT_TOKEN_TO_BE_REPLACED
Top PicksView