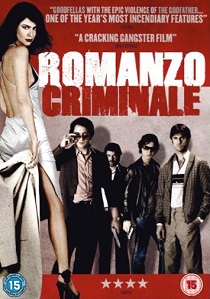 Directed by Michele Placido, Romanzo Criminale is a handsomely constructed, suspenseful and action-filled thriller made even more distinctive because of its careful layering of fictional events with a very real historical background. With an exceptional cast, including Kim Rossi Stuart, Romanzo Criminale is an underworld odyssey where alliances can crumble, loyalties clash and betrayals are avenged with hot lead.

Rome 1960s. Three young criminals, Lebanese (Pier Francesco Favino), Ice (Kim Rossi Stuart) and Dandy (Claudio Santamaria), decide to take a step up from the streets of Rome in to the world of organised crime. It's the birth of a smart and ruthless organization which soon crushes all its rivals assuming total control of the drugs trade, whilst imposing brutal criminal laws on Rome. Their progress and changes in leadership take place over twenty-five years, from the 1970s into the '90s, and are inseparably intertwined with the dark history of modern Italy: terrorism, kidnappings and corruption at the highest levels of government.

As the film moves from the 70s to the early 90s, Romanzo Criminale exposes the links between career criminals, terrorism and political corruption at the highest levels and the use of archive TV reports such as the bombing of Bologna Station dramatically recreate some of modern Italy's most turbulent social history. As the three friends head to the end of an era where all vendettas are executed and scores are settled only one question remains, who will be left standing?