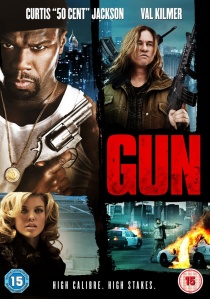 Gun is the latest big screen venture from the multi-platinum rapper, whose film career originally launched in 2005 with Get Rich And Die Trying, followed by performances alongside Al Pacino and Robert De Niro in Righteous Kill; Samuel L Jackson in Home of the Brave; Val Kilmer in Streets of Blood; and Before I Self Destruct in 2009.

In the face of rising crime rates and gun violence, the Detroit Police Force get ready to launch a full-scale war against gun runners. With the cooperation of Federal agents, they target a criminal named Rich (Curtis '50 Cent' Jackson) along with his operation. After a gun exchange goes bad, and Rich's friend Angel (Val Kilmer) steps up and saves his life, they form a special bond, until a secret is revealed that rocks Rich to his very core.

Gun tells the story of how two men on either side of the law, turn the basic metal objects into weapons of wealth, justice, revenge and power. The film observes the life of a gun as it passes from one stage to the next; manufacturer, distributor, user - and how it can end up in the wrong hands.

"Initially, when I started the plot," says Curtis "50 Cent" Jackson, "it was a really a socially conscious story about how guns go from the manufacturing point to retail, and how they can fall into the wrong hands. What made it interesting and so relevant to me was the fact that companies like Smith & Wesson are up 125 percent on sales in the middle of a recession."