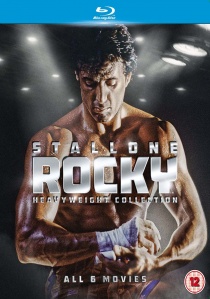 Sylvester Stallone stars in the greatest boxing saga of all time and triumphs as one of the most inspirational characters in cinematic history. Witness every epic, action-packed fight and unforgettable moment as Rocky strives for greatness through sheer determination against impossible odds. In conjunction with this exciting collection, the original 1976 Best Picture Winner will also be re-mastered and released on a special Blu-ray Limited Edition Steelbook, also out on 10th February 2014.

Including the brand new special feature: