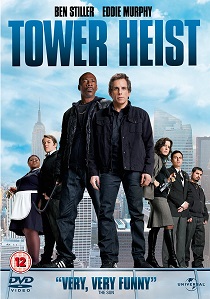 A wealthy Wall Street swindler gets his just desserts at the hands of the employees he stiffed in the year's most uproarious action comedy, Tower Heist, coming to Blu-ray and DVD on 19th March 2012 from Universal Pictures UK.

The film is produced by Academy Award® winning-producer Brian Grazer (8 Mile, A Beautiful Mind, American Gangster). The Tower Heist Blu-ray Combo Pack delivers the film in perfect hi-def picture and perfect hi-def sound and features over an hour of bonus features including two alternate endings, deleted scenes, a gag reel and exclusive behind-the-scenes features on the making of the film.

When the staff of New York City's most expensive and luxurious condominium discovers that the billionaire investment advisor living in the penthouse has plundered their retirement fund, they take matters into their own hands in a "downright fun, comic caper" (Mike Scott, Times Picayune). Convinced that light-fingered Wall Street Titan Arthur Shaw (Alan Alda) has stashed his ill-gotten millions in his apartment, building manager Josh Kovacs (Ben Stiller) rallies his troops and enlists the help of small-time thief Slide (Eddie Murphy) to make sure they get back what's rightfully theirs.

DVD
Tender and violent, terrifying and comic, The English, released on DVD 19th December 2022 from Dazzler Media., takes the arrows and bullets of its genre only to twist them into a uniquely compelling parable on gender, race, ... END_OF_DOCUMENT_TOKEN_TO_BE_REPLACED
Top PicksView