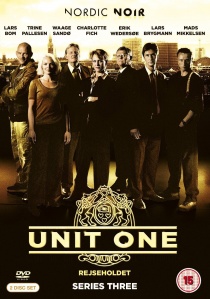 News
News Article Go back to homepage
With an overwhelming response to the season one and two releases earlier this year, Arrow Films is pleased to announce the UK DVD box set debut of Unit One: Series 3 on 6th January 2014.
Emily Stolp, Joanie Murray
Clare Gray
Shaun Wilson, Clare Gray, Abi Binning
Arrow Films
10 minutes
06/01/2014
#UnitOne Series 3
Thank you for supporting DVD365.net when you order using the link(s) below. As an Amazon Associate we earn from qualifying purchases
Buy DVD
Information

With an overwhelming response to the season one and two releases earlier this year, Arrow Films is pleased to announce the UK DVD box set debut of Unit One: Series 3 on 6th January 2014.

Based on actual, real-life Danish crimes which have occurred across the last 2 decades, the International Emmy award winning Unit One is one of the hardest hitting of the Scandi-crime series. It follows an elite mobile police force, referred to as a flying squad, as they are dispatched to assist local police in solving some of the most complex and high profile cases Denmark has ever bore witness to.

Starring alongside Mads Mikkelsen (Hannibal, The Hunt, Casino Royale, Pusher), who won the Best Actor Award at the 2012 Cannes Film Festival, are some of Denmark's brightest and best-loved actors, as seen on UK screens in The Killing, Borgen and Wallander.

Exhilarating and fast-paced, we follow the fascinating and dangerous world of the Unit One squad as they immerse themselves in the Danish underworld. Prepare to be thrilled by their commitment and affectionate solidarity, yet puzzled by the often horrifying examples of human nature they face in their day-to-day work.

Unit One asks many questions of the heroes and heroines portrayed in the show, such as what happens to those in real life who have chosen a career such as the ones portrayed in the series? A member of the flying squad is away from home 230 days a year, can a marriage and a family cope with that? What qualifications? What dedication? What kind of team spirit do these men and women possess in order to achieve one of the highest success rates in the world?