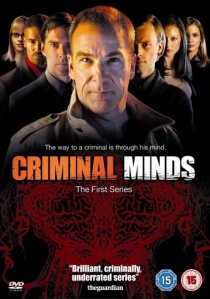 NewsFamilyDramaThrillerFantasy
News Article Go back to homepage
A psychological thriller with a difference, Criminal Minds has proven itself to be a huge hit with critics and fans alike. Get inside the minds of the deadliest criminals as one of the most menacing dramas ever to hit global TV screens is released on DVD from 12th February 2007 from Buena Vista Home Entertainment.
Mandy Patinkin, Thomas Gibson, Shemar Moore, Matthew Gray Gubler, A. J. Cook
Rob Bailey, Matthew Gray Gubler, Félix Enríquez Alcalá, Glenn Kershaw
Glenn Kershaw, Mark Gordon, Erica Messer, Gigi Coello-Bannon
Buena Vista Home Entertainment
16 hours 0 minutes
12/02/2007
Thank you for supporting DVD365.net when you order using the link(s) below. As an Amazon Associate we earn from qualifying purchases
Buy DVD
Information

Get inside the minds of the deadliest criminals as one of the most menacing dramas ever to hit global TV screens is released on DVD from 12th February 2007 from Buena Vista Home Entertainment. A psychological thriller with a difference, Criminal Minds has proven itself to be a huge hit with critics and fans alike. And as one of the top 10 most-watched TV shows in the US, where series two is drawing in over 16 million viewers, Criminal Minds has ratings other crime shows would kill for.

Dubbed as "the thinking-man's crime show", the series doesn't just rely on action for its kicks. It's just as gripping for its in-depth analysis of the most deviant minds and the psychological insights of the experts whose mission it is to catch them.

The series follows an elite squad of psychological profilers from the FBI's renowned Behavioural Analysis Unit (BAU). Emmy® winner Mandy Patinkin (Chicago Hope) plays top behavioural analyst Jason Gideon who leads a BAU crack-team as they meticulously piece together portraits of the U.S.'s most brutal killers, calculating their next moves to prevent them from striking again.

From tracking a serial rapist using a member of the team as bait, to hunting down a killer who takes his entire family hostage, every episode will have fans on the edge of their seats.

Each member of the team has their own area of expertise. Golden Globe® nominee Thomas Gibson (Dharma & Greg) plays a charismatic family man who's able to gain people's trust and unlock their secrets. Dr. Spencer Reid (Matthew Gray Gubler) puts in a stellar performance as a classically misunderstood genius.

As skilled as they are determined, the team will do anything they can to crack the criminals they're in hot pursuit of. But can Gideon, still recuperating from the nervous breakdown he suffered after a gruesome case, ever put the past behind him?

The box set features all 22 episodes along with a criminally good crop of DVD extras, including The Making of Criminal Minds - a look behind the scenes at the making of the show. Fans can also get to know Matthew Gray Gubler, (Dr. Spencer Reid) in an exclusive interview and watch never-before-seen scenes that didn't make the final cut.

This gritty, dark drama combines the slick, fast-paced action of a crime-show with the smart thinking of a psychological thriller, to create an unmissable 'edge of your seat' viewing experience.