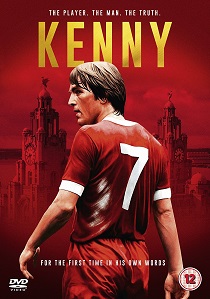 Kenny, released on DVD 20th November 2017 from Spirit Entertainment, is an incredible feature film that tells the unique story of a man whose life and career have become entwined with the fortunes of his adopted city. Tragedy and triumph have been shared over more than thirty years, cementing Kenny Dalglish's place in the hearts of everyone who lives in the city.

Known as 'The King', Kenny Dalglish was revered by fans during his time at Liverpool FC, where as a player and manager he won 27 trophies. However, arguably his greatest challenge came in the aftermath of Hillsborough, when he became a beacon of hope and strength in the fight for justice that followed.

In 1985, following the Heysel Stadium disaster, Kenny was appointed Player-Manager of Liverpool Football Club. Already lionized for his feats on the pitch, this intensely private 34-year old was now the public face of Liverpool, making the leap from player to gaffer with 39 deaths hanging over the club, the city, the entire nation.

His success at the club during the years that followed are uniquely captured through his eyes and interviews with legendary former players such as Alan Hansen, Ian Rush, and John Barnes as well as one of his greatest rivals Alex Ferguson.

These triumphs were eventually overshadowed by Hillsborough, the impact of that terrible day revealed by Kenny, his closest friends and family, with the toil of carrying the grief of an entire city eventually leading to Kenny's resignation as manager.

Uplifting, powerful, funny but at times truly heart breaking, this unique portrait of a proud Scotsman who captured the hearts of Merseyside will move everyone who watches it. This film tells the story of one of football's greatest players and a city's favourite son.

Related Articles
Being: Liverpool
Bobby Robson: More Than A Manager
Flutter, Northern Soul, Brookside's Most Memorable Moments, Once Upon a Time in The Midlands, The More You Ignore Me
Comments
UHD Releases News Pick