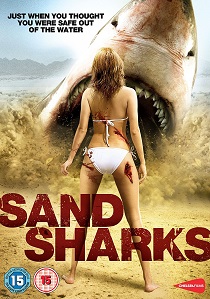 NewsComedy
News Article Go back to homepage
It might be safe to go back in the water, but first you have to get across the beach, which in Sand Sharks, released on DVD by Chelsea Films on 9th January 2012, is not as easy as it sounds given that nature's perfect killing machine is no longer confined to the ocean
Edgar Allan Poe IV, Gina Holden, Eric Scott Woods, Vanessa Evigan, Brooke Hogan, Corin Nemec
Mark Atkins
Gina Holden, Anthony Fankhauser, Dana Dubovsky, Courtney Brin
Chelsea Films
1 hour 26 minutes
09/01/2012
Thank you for supporting DVD365.net when you order using the link(s) below. As an Amazon Associate we earn from qualifying purchases
Buy DVD
Information

It might be safe to go back in the water, but first you have to get across the beach, which in Sand Sharks, released on DVD by Chelsea Films on 9th January 2012, is not as easy as it sounds given that nature's perfect killing machine is no longer confined to the ocean.

When the decapitated head of a dune biker is found near the beach on the sleepy island resort of White Sands, the wounds suggest the deceased was the victim of a shark attack. Contradicting this theory, however, is the fact that the remains were found well above the tide line and at the end of a blood trail coming from an inland direction. Determined to get to the bottom of the mystery, Deputy Sheriff Brenda Young (Vanessa Lee Evigan) calls in shark expert Dr. Sandy Powers (Brooke Hogan) to assist her in the investigation.

Meanwhile, Brenda's disgraced ex-boyfriend Jimmy Green (Corin Nemec) has returned to the beach resort with plans to revive the local economy and make a quick buck, with which he hopes to pay off his mob creditor, by throwing a huge spring break party dubbed the Sandman Festival. Concerned by the possibility there may be a shark in the area, Brenda wants to keep the beaches closed for the time being, but Jimmy is determined to have his party regardless. As thousands of college kids arrive on the island ready to let loose for the weekend, Dr. Powers makes a terrifying discovery. Not only are there sharks in and around White Sands, but they appear to be the direct ancestors of a prehistoric species with the ability to swim through sand as though it were liquid. Now, the most menacing beasts ever to rule the seas have taken to the land and the beaches of White Sands are about to run red.

Giving a terrifying new meaning to the phrase "a fish out of water", Sand Sharks is a bloody feeding frenzy of fun that gleefully acknowledges its debts to its influences with a cavalcade of in-jokes, humorous cinematic references and witty one-liners.