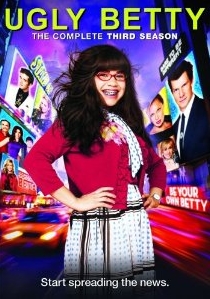 Over indulge in the vibrant scene of high fashion with the most charismatic cast on television as the critically-acclaimed US sitcom Ugly Betty: Season Three struts onto DVD from 7th December 2009 from Walt Disney Studios Home Entertainment. It's all change for Betty, but if she thought being an assistant was tough, wait until she becomes an editor...

It's a year of change for the fabulously fashion-unconscious Betty Suavez (Emmy and Golden Globe Award-winner, America Ferrera) and her friends at MODE. With the future of the magazine at stake, a new roommate and the ever-changing carousel of office relationships, Betty's life is fuller and more hectic than ever. Topping it all is her move to the big city making her question whether she truly belongs in the new, fast-paced world that she has fallen in to.

Leaving behind her family and Casa Suarez - father Ignacio (Tony Plana), big sister Hilda (Ana Ortiz) and nephew Justin (Mark Indelicato) - Betty hopes to advance her publishing career by moving into a shabby-chic apartment in the heart of New York city to begin a new life. Things turn out to be a lot more complicated than she was expecting.

Season Three finds Betty burying the hatchet - but then reopening it - with childhood nemesis Kimmy Keegan (Lindsay Lohan) after helping her land a plum job at MODE. Kimmy finds herself in conflict with Wilhelmina Slater's (Vanessa Williams) flagrantly gay assistant, Marc St James (Michael Urie) with hilarious consequences. To add insult to injury Betty also ends up with an unlikely roommate in the form of MODE receptionist and über-bitch Amanda Tanen (Becki Newton).

Packed full of exclusive extras including a Going home to New York City featurette, Betty Bloops and a hilarious Deleted Scene, this year's must-have accessory Ugly Betty Season Three is the ultimate high octane fashion comedy and a must-have for all fans. 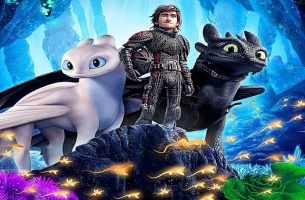 HotDVDBDUHD
From DreamWorks Animation comes a surprising tale about growing up, finding the courage to face the unknown as How to Train Your Dragon: The Hidden World is released 10th June 2019 on DVD, Blu-ray and 4K Blu-ray from Universal Pictures (UK). END_OF_DOCUMENT_TOKEN_TO_BE_REPLACED
Comments
DVD Releases News Pick

DVD
For the first time in the cinematic history of Spider-Man, our friendly neighborhood hero's identity is revealed in Spider-Man: No Way Home, released on DVD, Blu-ray and 4K UHD 4th April 2022 from Sony Pictures Home ... END_OF_DOCUMENT_TOKEN_TO_BE_REPLACED
Top PicksView