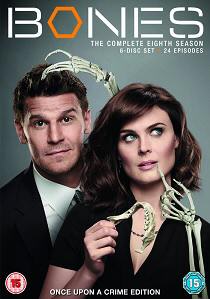 Relive all 24 killer episodes that follow Dr Temperance 'Bones' Brennan (Emily Deschanel: Cold Mountain, Spiderman 2l), a highly skilled forensic anthropologist and her quest to discover the mystery and truth behind the human remains brought to her by FBI Special Agent Seeley Booth (David Boreanaz: Buffy the Vampire Slayer, Angel). Still providing twists, turns and shocks in its eighth Season, Bones is a thrilling mystery with darkly comic undertones, based on the life and writings of forensic anthropologist and novelist Kathy Reichs.

Finally cleared of an unjust murder accusation, Season 8 sees 'Bones' reunite with Booth and the squints. Although the team crack some of their most challenging cases yet, dangerous madman Christopher Pelant (Andrew Lees: Grey's Anatomy, House) persists with his murderous rampage. But with Brennan in his target range he is inching ever closer to Bones and Booth each day. Meanwhile, as if the challenges Booth faces with fatherhood and his unique relationship with Bones aren't enough, his mother shows up after a 24-year absence and there is shocking news regarding some of his colleagues.

Bury yourself in Bones: Season 8 as the darkly comic hit show digs deeper than ever before with bonus material including deleted scenes, gag reel and 'Dying to know' where Bones answer your questions!