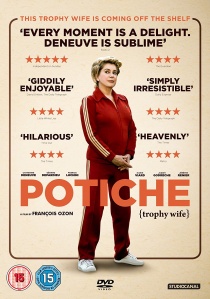 Based on the play of the same name by Pierre Barillet and Jean-Pierre Grédy, starring Catherine Deneuve, Gérard Depardieu and Fabrice Luchini, Potiche is out to own on DVD and Blu-Ray on 10th October 2011 from Optimum Home Entertainment.

North of France, Sainte-Gudule, 1977. Suzanne (Catherine Deneuve: 8 Women, Dancer In The Dark) is a placid housebound 'trophy housewife' (or "potiche") of wealthy industrialist Robert Pujol (Fabrice Luchini: Paris, Moliere), who oversees his umbrella factory with an iron fist and is equally tyrannical with his children and wife. When the workers go on strike and take Robert hostage, Suzanne steps in to manage the factory. To everyone's surprise, she proves herself a competent and assertive woman of action. But when Robert returns from a restful cruise in top form, things get complicated. Gerard Depardieu (Greencard, Cyrano De Bergerac) plays Babin, a former union leader and Suzanne's ex-beau who still holds a flame for her.

Acclaimed writer-director François Ozon (Swimming Pool, Under The Sand and Time To Leave), who had previously directed Ms. Deneuve in the international hit 8 Women, turns the original play on its head to create his own satirical and contemporary take on Sarkozy's France, the war between the sexes and the class divide.

BD
Finding praise from critics around the world, Boyhood, following the life of Mason, from early childhood to his arrival at college, is released on Blu-ray and 4K UHD 27th March 2023 from Arrow Films. END_OF_DOCUMENT_TOKEN_TO_BE_REPLACED
Top PicksView