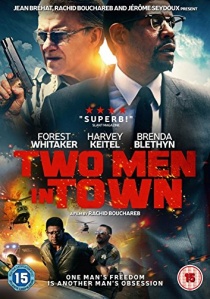 Two of Hollywood's finest go head to head in the ultimate battle for redemption as Two Men in Town arrives on DVD and digital platforms from 6th July 2015, courtesy of Signature Entertainment.

Starring Forest Whitaker (Phone Booth, Taken 3) and Harvey Keitel (Reservoir Dogs, The Grand Budapest Hotel), this gritty, no-holds barred psychological thriller tells the story of troubled youth Will Garnett (Whitaker) who is finally being released after an 18-year long stretch in prison. With the help of an idealistic parole agent (Brenda Blethyn - Dead Man Running, Atonement) and his new-found Islamic faith, Garnett struggles to rebuild his life and overcome the violent impulses which torture and possess him.

However, Bill Agati (Keitel), the vengeful Sheriff of the small New Mexico border county where Garnett is released, has other ideas. Convinced that Garnett is irredeemable and major a threat to the security of his county, Agati launches a vicious, sustained campaign to return Garnett to prison for life. The question is, how far will he go?

Featuring an outstanding supporting cast that includes Ellen Burstyn (Interstellar, The Calling) and Luis Guzman (The Last Stand, The Taking of Pelham 1 2 3), Two Men in Town is a brilliantly understated revenge drama which asks the question: can we ever truly leave a dark past behind and start again?