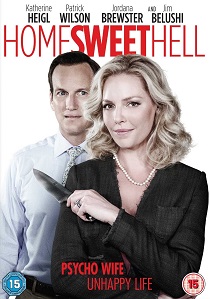 The dark comedy Home Sweet Hell is available on Digital HD 4th May 2015 and DVD and VOD 18th May 2015 from Sony Pictures Home Entertainment.

Home Sweet Hell stars Katherine Heigl - Knocked Up) as Mona, a woman who will stop at nothing, including killing the competition, to save her seemingly perfect suburban life. Also starring in the film is Patrick Wilson (Insidious franchise), Jordana Brewster (Fast & Furious franchise), James Belushi (According to Jim) and Kevin McKidd (Grey's Anatomy).

Bonus features for Home Sweet Hell include two deleted scenes and the all-new featurette, Suburban Butchery: Making Home Sweet Hell, which explores the script, acting and approach that the writer, cast and crew took to create the film.

Don Champagne (Patrick Wilson) seems to have it all: a successful business, a perfect house, perfect kids and a perfect wife. Unfortunately, when his wife, Mona (Katherine Heigl), learns of Don's affair with a pretty new salesgirl (Jordana Brewster), this suburban slice of heaven spirals out of control. Don soon realises that Mona will stop at nothing, including murder, to maintain their storybook life where "perception is everything".

BD
Arriving on DVD and Blu-ray 31st May 2021 from Acorn Media (UK), the hit police corruption drama from the makers of Bodyguard returns as Series Six of Line of Duty sees AC-12 facing their most ... END_OF_DOCUMENT_TOKEN_TO_BE_REPLACED
Hot PicksView