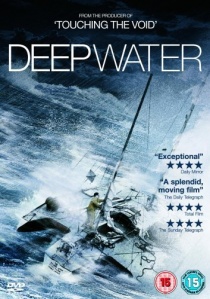 Donald Crowhurst's true-life story is one of solo adventure. His mission was to be the first and fastest person to sail alone around the world non-stop in the first ever Times Golden Globe boat race. Experience the highs and lows of Crowhurst's journey on DVD from 16th April 2007 when the poignant documentary Deep Water is released by Pathé Distribution Ltd.

Produced by John Smithson (Touching the Void) and beautifully narrated by Tilda Swinton (The Beach, The Chronicles of Narnia), this profoundly moving documentary includes real-life footage from the event, tracing the physical and psychological pressures the competitors have to undertake to get to the finish line.

1968: The Sunday Times announces that they are holding a competition to find the fastest yachtsman to sail, single-handedly, non-stop around the world. Excited by the challenge, inexperienced sailor Crowhurst raises the money by re-mortgaging the family home, and finds himself quickly named by interested media as "the dark horse of the sea".

As Crowhurst sets off from Teignmouth on 31st October, things quickly start to go wrong and he finds himself out of his depth. As the realisation of the extent and pressure of the race sets in, Crowhurst battles with extreme loneliness and the pressure of the mounting debt he has left behind - all having a huge psychological affect on his mental state. When bad judgement and luck send him over the edge into desperation, he starts to falsify his position in the race in his logbook and decides to hideout off the South Coast of America, planning to rejoin his fellow yachtsmen on their return journey.

This compelling DVD features bonus material including extended family, journalist and yachtsmen stories about the race. The eventual winner of the 1968 race, Sir Robin Knox-Johnston gives a 10-minute interview on his experience. Today at the age of 67, he is the oldest competitor in this year's race and is risking his life again!

Deep Water is a fascinating character study of one man's plight to conquer the wide ocean, capturing the terrifying and isolated journey.