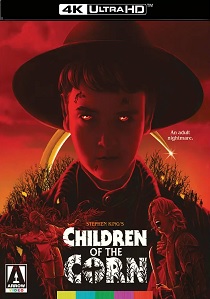 NewsHorrorThrillerLinda HamiltonArrow
News Article Go back to homepage
From the mind of Stephen King, a young couple is trapped in a remote town where a dangerous religious cult of children believes that everyone over age 18 must be killed in Children of the Corn, released on 28th February 2022 on 4K UHD from Arrow Video.
Linda Hamilton, Peter Horton, R.G. Armstrong, John Franklin, Courtney Gains, Julie Maddalena, John Philbin
Fritz Kiersch
Donald P. Borchers, Terrence Kirby
Arrow Video
1 hour 32 minutes
28/02/2022
#ChildrenOfTheCorn
Thank you for supporting DVD365.net when you order using the link(s) below. As a member of the Zavvi affiliate program we earn from qualifying purchases
Buy UHD
Information

And A Child Shall Lead Them...

From the mind of celebrated horror author Stephen King, the man behind such classic terror tales as The Shining, Carrie, and It, comes one of his most chilling offerings yet.

Linda Hamilton (The Terminator) and Peter Horton (Thirtysomething) star as a young couple who find themselves lost on the backroads of Nebraska, eventually winding up in the seemingly deserted town of Gatlin. But the town is far from empty. As the couple soon discover, it is inhabited by a twisted cult of murderous children, thirsty for another blood sacrifice...

Released on 28th February 2022 on 4K UHD, Arrow Video is proud to present a 4K restoration of the film that launched one of the most enduring horror franchises of all time. Children of the Corn... they're an adult nightmare!

DVD
Doctor Strange teams up with a mysterious teenage girl from his dreams who can travel across multiverses in Doctor Strange in the Multiverse of Madness, released on DVD, Blu-ray and 4K UHD 18th July 2022 from ... END_OF_DOCUMENT_TOKEN_TO_BE_REPLACED
Top PicksView