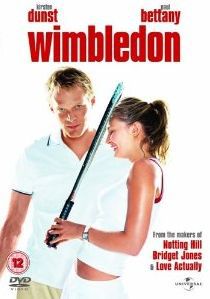 Seeded at 119 in the world and near the bottom of the world tennis rankings, after 25 years struggling British tennis player Peter Colt has finally resigned himself to hanging up his whites and taking up the position of tennis director at an upmarket club and baby sitting a group of tennis mad old ladies. However, before he has the chance to take up his new and exciting career, he is unexpectedly granted a wildcard entry into the Wimbledon championship. Declaring this to be his final tournament, Peter fully expects to be knocked out in the first round. Although he once managed to reach the dizzy heights of 11th in the world, after being routed in pretty much every tournament he's entered, Peter isn't being too modest in his expectations.

Enter American hotshot Lizzie Bradbury, bad girl and rising star of the women's international tennis circuit. Focused, driven and pushed hard by her over-ambitious and over-protective father Dennis, Lizzie lets nothing get in the way of her game. But that's until Peter accidentally walks into her suite and gets a view that you normally don't get on centre court. And that's when the sparks between the pair begin to fly. Fuelled by a mixture of his newfound luck, love and an on-court prowess which Peter hasn't found within himself for years, he soon finds his way to the final and the unimaginable possibility of winning both the men's single title and the heart of Lizzie. Let's just hope that his luck, and the good old British weather, can hold out long enough for him to succeed where so many have failed.

For such a recent release the picture transfer should be nothing short of immaculate, and in essence, that's just what we have here. The colours are rich and bold, black levels are solid, whilst the colour depth and detail is extremely impressive throughout. There's no problem with either artifacting, outlining or edge enhancement, whilst the print is in pristine condition. I'm not really sure what I was expecting in the way of picture quality from this film, but either way, I was blown away by the superb quality of the print and on this performance alone it deserves to be used to show off the latest plasma or LCD technology at your location home cinema retailer.

Universal are usually the champions of the DTS soundtrack, but as with some of their previous releases, such as The Chronicles of Riddick and The Bourne Supremacy, Wimbledon is yet another release which misses out, which is even the more infuriating when you consider that the region one edition comes equipped with a DTS track. Never the less, this is no action flick and the DTS soundtrack is not going to be missed too much. Still, the Dolby Digital 448Kbps soundtrack manages to impress with some good stereo steerage in the front channels and clear and precise dialogue in the centre channel.

However, it is the surround channels which deserve the most praise. Never over done, the ambient effects are just perfect and whenever Peter is on court there's plenty of effects in all of the channels, from his own thoughts in his brain to the cheering of the crowd. Even the musical score excels and it all adds up to a very involving and impressive soundtrack. It's hard to believe that this is a romantic comedy and not some sort of effects laden action adventure.

The menu system is scored using the films opening theme tune as well as being cleverly animated with various full screen cut-scenes forming a rather effective menu montage. The menu transitions are impressive whilst even the lowest of the sub-menus still manage to be animated and scored. Once all the animations have been completed the menu system itself is in keeping with the film and is presented as a sort of BBC Wimbledon scoreboard. The menus are easily laid out and selections are intuitive. Never the less, spend too long on a menu and it will time out and the film will soon being to play so ensure you opt for pause button rather than the menu when nature calls.

The extras start off with the feature Audio Commentary with director Richard Loncraine and actor Paul Bettany who plays Peter Colt. Whenever a star and director get together it can sometimes end up being a constant slap on the back exercise. Fortunately, the commentary here is superb with Richard Loncraine providing plenty of in-depth information about the filming techniques and general information about the production whilst Paul Bettany provides the laughs and the occasional nugget of information. It's all very interesting and there's hardly ever any silence, and when there is, it's a deliberate break in the commentary. The only downer is the lack of a commentary from Kirsten Dunst, although she's likely to be a bit busier in Hollywood these days.

The first of the features is the rather short three minute Welcome to the Club featurette. There's a few comments from the principle cast about the wonders of Wimbledon and there's even a bit of behind the scenes footage on the inner workings, but other than that it is criminally short and a missed opportunity to have delved a bit deeper into the history of the club. And unless you're rather keen of eye, until you watch the five minute Ball Control feature you'll probably be rather impressed at the tennis skills shown by the various actors. Whilst there are indeed some professional tennis players in the film, this feature exposes the actors as cheats and reveals that the wonders of CGI have been used to great effect with plenty of Matrix 'bullet time' camera sweeps used to a very high degree of success.

In yet another disappointingly short feature, ex-professional tennis player Pat Cash is shown coaching the actors and helping to choreograph some of the tennis rallies. Still, both Paul Bettany and Kirsten Dunst manage to provide some additional information on their arduous training regime whilst neither go on to mention the fact that their tennis coaching now helps them thrash their friends and relatives. The final feature is the ten minute Wimbledon: A Look Inside featurette. It's the usual promotional material with interviews with the principle cast members who discuss the storyline and the their reasons for taking the role. There's also a number of interviews with real tennis professionals, including everyone's favourite bad boy John McEnroe. And where would a promotional feature be without the usual back slapping flannel from the producer and director?

Things are rounded off with the trailers for the other British comedy flick Bridget Jones: The Edge of Reason, The Terminal, Billy Elliot the Musical and Vanity Fair. All in all, it's quite a good selection of extras, even if the featurettes are a little on the short side. However, match point is saved by the superb audio commentary track. Still, I have this sneaking suspicion that a fully loaded special edition will be in the offing in the not to distant future.

Not fit with producing gangster style films by the van load, yet again, we Brits have come up with another romantic comedy (albeit with large amounts of American money and acting talent). Still, at least this time there's no sign of the floppy haired Hugh Grant, plus it's a subject matter close to the hearts of most Brits each and every summer as the latest British hopeful gets thrashed on centre court. However, whilst there's no doubting it's a romantic comedy, and a fairly decent one at that, it still lacks that little sparkle that only Richard Curtis and, yes, even Hugh Grant can offer. As a result Notting Hill still reigns supreme as the best British comedy film of late.

Never the less, with some ingenious special effects, superb camera angles and cinematography from director Richard Loncraine and a marvellous trip into the mind of a tennis player, Wimbledon is still worth a viewing; even if it's simply a rental. However, one thing is for sure, the ladies will be swooning at every opportunity and if you ever need some extra Brownie then a purchase wouldn't go a miss.