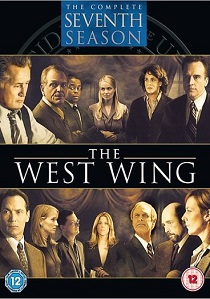 For nearly eight years, President Josiah Bartlet has led the most powerful nation on earth. Now, as Bartlet's time in the White House comes to an end, two formidable men vie for the ultimate political prize - the Presidency of the United States of America.

After working on the campaign of Bartlet's vice president, who has already been eliminated from the race, Will Bailey and Donna Moss prepare for even greater challenges in the upcoming election.

Recently promoted Chief of Staff C.J. Cregg and stoic Toby Ziegler, the rumpled and sleepless communications director, stay focused on the numerous tasks at hand. Deputy National Security Advisor Kate Harper continually rises to the occasion, as does C.J.'s brilliant assistant, Charlie Young. Deborah Fiderer continues to serve as Bartlet's quirky, dedicated personal secretary. The only question is, who will be sat in the Oval office come the end of the season?

For a television series the level of detail is very good. Perhaps it's down to the simple fact that it's the final season and there were a few extra dollars to throw about in post production. Also, I suspect that the television production companies have finally got the message and decided to put a little extra effort into their money spinning DVD sales.

The transfer is clean and precise with very few of the problems, such as edge enhancement and grain, that tends to plague these television to DVD transfers. Colours are rich and vibrant and the various blacks and contrast levels in both the interior and exterior locations are well balanced throughout. Whilst it doesn't challenge a Hollywood blockbuster, the quality of the transfer means that this release of The West Wing can hold its head up and claim to one of the better television series transfers out there in DVD land.

The series is accompanied by a fairly standard Dolby Digital 2.0 192 Kbps soundtrack. With the age of digital television and satellite programming in the states, I would have thought that this rather high profile and successful series would have had a full blown 5.1 soundtrack. Still, The West Wing is not the kind of series that requires anything too fancy in surround department and, being primarily dialogue based, the soundtrack more than meets its needs. Fortunately, the usual habit of adding an annoying musical score to drown out the dialogue has been resisted and the only real music is provided from the opening title sequence.

Unfortunately, as with the previous six releases, there are no extras. The six discs in the boxset contain nothing more than a scored menu and episode selection. Considering that this is the final season, and the final boxset in the series, you would have thought that at this point in time there would be a room full of deleted scenes, outtakes and various interviews with the cast and crew. Even minor television series, and yes even the cheaper British ones, manage to find some sort of extras to garnish their DVD releases with. But these mysterious extras do exist, but you won't find them here. In order to get your hands on the extras you need to buy the complete series box-set - which if you've already collected the previous DVD releases is a bit irksome to say the least - plus it's a rather expensive proposition in order to get some extras.

I can see why the series was immensely popular, especially in America, but given that the workings of the various American government departments is as baffling to most Americans as it is to outsiders, it's very hard to see just how and why The West Wing is so popular here in the United Kingdom. Perhaps it's down to the drama, the excellent acting and the behind the scenes style of filming? May be people are expecting some amazing revelations, see the inner workings of government, or just perhaps the audience is simply trying to escape from their political realities to something more comfortable and to what they know and understand. Either way, it's all fascinating stuff.

In a brilliant bit of script writing, the final season of The West Wing opens with the arrival of new President of the United States. However, you only see his feet stepping from the Presidential car and the rest of the season is then dedicated to the election process that brought the mystery person there. Who is it? Well you'll have to watch and find out as episodes then cover the two political parties and the various scandals, dirt digging and spin doctoring that is always associated with an American election (although it does seem to be spreading rapidly across the pond). It's a gripping finale to a highly popular and addictive series - just try to avoid reading the episode synopsis booklet before hand otherwise the cat will be well and truly out of the bag (although, it's not actually that hard to guess the final outcome).

It's probably safe to assume that a British equivalent of The West Wing wouldn't be as successful - although the British comedy equivalents of Yes Minister, Spitting Image and The New Statesmen were a massive and extremely funny success. No, the British would rather poke fun at their institutions and masters rather than have a weekly drama series. After all, we have to put up with government scandal and drivel appearing on our screens on a daily basis, so why force us through a drama series as well? Nope, it's much safer to watch the governmental process of other countries at a safe and convenient distance.

I think it's fairly safe to say that fans of the The West Wing will be dashing out to by this final boxset, plus it's available quite a few weeks before the American release too. However, although equipped with six discs, the RRP of £62.99 is a tad on the pricey side (although it's not as pricey as some other television boxsets out there). Never the less, shop around on-line and you'll soon find it at a more reasonable, and far more enjoyable, price. The only thing that takes the shine off things is the lack of extras - but if you're not too bothered about those then it's the perfect box-set to complete your collection.