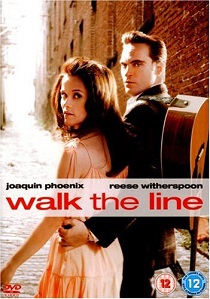 Walking the Line charts the life stories of both legendary musician Johnny Cash and his wife, the singer June Carter. From the off, the film's main focus is rather unsurprisingly on Cash himself. The story takes in his troubled childhood, his early successes, his relationship with both his family and the women in his life, his drug addiction problems right through to his legendary concert at Folsom Prison, where the story actually starts as Johnny thinks and looks back at his beginnings.

Johnny took an early interest in music whilst growing up on an Arkansas cotton farm during the Great Depression. He and his older brother Jack had great fun together and they enjoyed their fishing days together. However, Jack died in a table saw accident whilst Johnny was away fishing. Not only did Johnny feel extremely guilty at not helping his brother, his father continually placed the blame for his death firmly at his door. So it was a welcome change when Johnny became old enough to escape the farm and enlist in the air force, being shipped out out to Germany in the process. It was there he was inspired by the B-movie Inside the Walls of Folsom Prison, and composed the now world famous song Folsom Prison Blues.

Finally leaving the air force, Cash married his pregnant girlfriend Vivian Liberto and attempted to succeed as a door-to-door salesman. However, this didn't pay the bills and they were soon threatened with eviction from their house. But with his heart set on music, Johnny finally got a break, and paid the bills, when he succeeded in an audition with Sam Phillips at Sun Records. Johnny soon found himself on the road where he met the famous country singer June Carter along with other stars such as Elvis Presley and Jerry Lee Lewis. But with the touring taking a toll on his marriage, Johnny became addicted to amphetamines and his marriage ultimately failed. But after reading letters from his fans in prison, Cash was inspired to perform at various correctional facilities around the country, culminating in the now famous concert at Folsom Prison and an eventual marriage to June Carter.

The picture is bright and colourful with a high level of detail throughout. There's a hint of over saturation, but that's to give the picture that 1950's look, whilst the contrast levels, black levels and flesh tones are superb. The diverse sets of colours and tones set by the various stage shows are handled with ease and there are no signs of problems with outlining or bleeding. Also, given that it's such a recent release, the transfer is perfect with no signs of dust specks or other forms of print damage, and even though there's two capacity sapping DTS and Dolby Digital soundtracks, the bitrate is surprisingly high throughout. Overall, it's a cracking picture and it certainly helps the film to shine on DVD. And if this is impressive, just what are we letting ourselves in for once high definition DVD hits the high street?

For what is essentially a musical the soundtrack needs to be a pretty impressive affair. And on the whole, both the 768 Kbps DTS and 448 Kbps Dolby Digital soundtracks manage to produce something special. However, one annoying feature of both soundtracks is that the music is much louder than the dialogue and you end up having to increase the volume to listen to the dialogue and then decrease it again every time Johnny Cash picks up his guitar. Still, when you can hear the dialogue, it's crisp and clear in the centre channel and the front stereo channels offer some good stereo steerage whilst the rear channels, along with the occasional rumble from the LFE channel, all make for a rather involving soundtrack. And whilst there's not much to separate the DTS and Dolby Digital soundtracks, the superior channel separation of the DTS track ensures that it should be the soundtrack of choice.

There are two versions of Walk the Line available to buy. There's the single disc edition and a special double disc edition with a whole host of additional goodies. However, I was only sent the film disc for review so I'm unable to comment on the second discs worth of extras. Never the less, looking at what's available on the first disc, and the list of extras on the second, it certainly looks like an interesting proposition.

Menu wise, after you've managed to get past the annoying trailers for Shopgirl, Breakfast on Pluto, Prison Break, Transamerica, a teaser for X-Men 3 : The Last Stand and even an advert for Mars Bars of all things, you finally get to the menu. Still, at least you can skip past all of this lot and head straight for the menu. The main menu itself is scored and animated with cut scenes from the film whilst there's some nice transition effects between the various menus.

With the majority of the extras contained on the second disc there's still some to explore on the first. The main extra is the Audio Commentary by Co-writer and Director James Mangold. It's an interesting yack track as, being both the co-writer and the director, he has plenty to talk about. Mangold explains just how the screenplay came together, along with the usual difficulties that seem to plague every production, the amount of input from the late Johnny Cash and just how he went about putting the award winning cast together. Understandably, given the amount of things to talk about there is always going to be the occasional quiet moment as he gathers breath (and perhaps has a drink of water), but it doesn't take long before the information starts to freely flow again. Also, if you'd rather watch the filmr than listen to the commentary track, it's also available as a welcome subtitle track.

And as if the film wasn't long enough, with dual Dolby Digital and DTS soundtracks plus the audio commentary, there's still room on the main disc for yet more extras in the form of ten Deleted Scenes with an optional commentary from James Mangold. Running for eighteen minutes, the scenes can be individually selected from the menu or played in one go. It's good to have Mangold on hand to explain why the various scenes were trimmed or cut, but as appears to be the norm these days, the majority of scenes were cut for pacing and timing purposes where the scene had already been explained. Still, I would have liked to have seen the scene where Johnny gets hold of his first record kept in the film. Finally, running for two minutes, the main disc is rounded off with the International Theatrical Trailer.

Reese Witherspoon's performance in Walk The Line won her an Oscar and a BAFTA Film Award for Best Performance by an Actress in a Leading Role. And it's not difficult to see why, and she rightly won her awards ahead of her co-star Joaquin Phoenix. It also goes to prove Witherspoon's versatility and that she is much better in more serious roles rather than those light weight rom-coms such as Just Like Heaven. And that's saying something too, because Joaquin Phoenix manages to put in a rather cracking performance - which is all the more impressive when you consider that I knew very little about Johnny Cash and his music.

Never the less, whilst watching the film I tried to keep avoiding making parallels with that other award winning musical biopic Ray. Trouble is, I kept coming to the conclusion that I preferred Jamie Foxx's film and that his singing was much better. Sure, I appreciate that Foxx is more the singer (he's even released an album), but I just felt that Joaquin Phoenix's singing was missing that certain "wow" factor that amazed me so much with Jamie Foxx. Still, at the time of release, the like for like sales of both versions of Walk The Line on Amazon appear to be way ahead of Ray.

I'm always puzzled by Twentieth Century Fox Home Entertainment's idea behind releasing two versions of a film as it's nearly always the single disc edition that finds itself in the bargain bin or sale section. As a result, I'm still just as puzzled by this release because for an additional £5 the two disc edition provides you with so much more to enjoy. Still, I guess that there's always going to be people who aren't interested in those extras, but film lovers, and especially fans of Walk the Line, should opt for the double disc edition. Highly recommended.