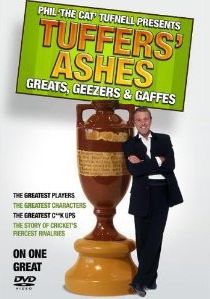 ReviewTV SeriesFamilySpecial Interest
Review Article Go back to homepage
Phil Tufnell and Henry Blofeld look back over the 2005 Ashes Series and the on-going feud between the English and their antipodean rivals. Living up to its title, there are gaffes aplenty, not to mention streakers, pitch invasions and some of the worst fielding known to man!
Phil Tufnell, Henry Blofeld
Sport, Television, Family
2
1 Hour 1 Minute
Thank you for supporting DVD365.net when you order using the link(s) below.
Buy DVD
Story

With England in the process of retaining or loosing the ashes (delete as appropriate - although by all accounts it won't be a very happy 2006 homecoming celebration) cricket's legendary king of controversy and spin, and all round great geezer, Phil Tufnell takes a look at the history of the most prestigious competition in the international cricket calendar. None cricket loving countries may well be dazed and confused by a game that can run for nearly a week and still end up in a draw, but cricket fans the world over should be interested in what Phil has to say.

Tuffers interviews the charismatic British legend of the great game Henry 'Blowers' Blofeld and exhibits some of the best footage of cricket legends such as Arthur Gilligan, Keith Miller and Herbert Sutcliffe and more contemporary heroes of the sport such as lan Botham and Shane Warne. And it's a well balanced look at the game of cricket too with plenty of bashing for both sides.

Looking back over the 2005 Ashes Series, the documentary packs in some memorable moments; the sixes and somersaults, near-impossible catches, and glorious centuries before lunch and/or rain stopped play. Tufnell also gives his personal view on the on-going feud between the English and their antipodean rivals. Living up to its title, there are gaffes aplenty, not to mention streakers, pitch invasions, and some of the worst fielding known to man!

Picture wise, let's just say that the production company for Tuffers' Ashes - Greats, Gaffes And Geezers didn't have a Hollywood style budget. In fact, I think they must have had a quick whip-round for the estimated two pound fifty budget - with the majority of that spent on false moustaches. Still, as long as it's watchable there's not too much to complain about, and watchable it is. Given that the programme is made up of clips from the ashes series from a number of years the picture quality is dependant on the quality of the source material - with varying degrees of image quality. On the whole though, it's good enough, with only the awful 80s hairstyles making your cringe.

As with the picture, the sound is nothing special - with only dialogue and the awful musical soundtrack being of any importance. Still, the 228 Kbps Dolby Digital 2.0 soundtrack is more than adequate, even if it's nothing spectacular. The dialogue is crisp and clear in the front stereo channels whilst the musical score can be a little overpowering at times. Mind you, would you expect anything different from a simple sporting documentary?

The menu is animated with clips from the various ashes games playing in the small window in the background. It's also accompanied by an extremely annoying cricket style theme tune that wouldn't be out of place on your typical Sky Sports cricket presentation. The only extra on the disc is a twenty-five minute chinwag with Phil Tufnell and Henry Blofeld. In it, Tuffers asks Henry numerous questions about cricket over the years and just how good this and that player was. It's a good old friendly natter and something that you could almost envisage occurring on your very own sofa.

I guess if you like the game of cricket then your enjoyment of this DVD will be much higher than your average Joe who doesn't - even if it is a painful experience watching the England team getting yet another thrashing over and over again. Still, you do see England get their occasional revenge, plus there's the infamous "bodyline series" to view too. Also, why else would you be watching the disc if you didn't like cricket - although I guess you could have a rather odd fixation for Phil Tuffnel?!

So, it's a disc that is strictly for cricket fans - and more specifically the barmy army. Enjoy, cry, wince or laugh, it's all part of the cricketing experience, plus there's a nice extra feature too. Any one for cricket? Oh hang on moment, wrong sport...