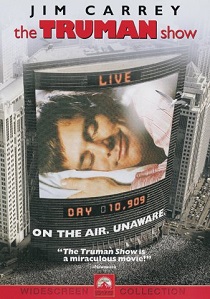 ReviewFantasyJim Carrey
Review Article Go back to homepage
Twenty-nine years ago, a baby boy was adopted by the OmniCam Corporation to become the star of the most popular television show of all time. His name is Truman Burbank and he doesn't know anything about it, yet.
Jim Carrey, Laura Linney, Noah Emmerich, Natascha McElhone, Holland Taylor, Brian Delate, Blair Slater, Peter Krause, Heidi Schanz
Fantasy
1
1 Hour 43 Minutes
Buy DVD
Story

Ever been accused of living in your own dream work? Well Truman Burbank certainly does. Using miniature cameras placed on people and in every part of the town of Sea Haven, every move he has made since being born has been recorded and broadcast non-stop to billions of people around the world. Everything in his life is fake, even his wife is an actress.

But, bit by bit, the world he is living in is falling apart as more and more things get him suspicious about his true existence. From falling set lamps in the sky, to strange interference on his car radio, his suspicions grow by the day. The more he tries to leave town, the more obstacles are placed before him.

From an early age he was instilled with a fear of water when his 'father' drowned in a boating accident. Naturally, the town is surrounded by water and the only road out means crossing a bridge over the water. Finally plucking up the courage to leave, maximum effort is made to stop him leave. Disasters from forest fires to nuclear meltdown stop him in his tracks.

Thwarted, he attempts to book an airline ticket, which naturally are all booked up for months in advance. Just look at the off putting posters on the walls, they're just a hoot. Finally, in a desperate attempt to leave, he faces his greatest fear of all. Water. He sets sail, all under the watchful eye of the director and billions of viewers.

The picture is bright and crisp. It is a gorgeous transfer and a shinning example of the DVD technology at work. The surround channel is effective when called for, especially during the main storm scene and the first of his attempted escapes.

The only thing that disappoints on this disc are the lack of extras as all we have are a couple of trailers. However, the cleverly animated menus are a welcome addition in a very sparse disc. Shame, it could have been so much more.

The film is a clever parody of the old 60's American shows where product placement was more of less the main aim of the programme. Truman is tempted with wonderful goods and gadgets in clear product placements whilst other actors manoeuvre him about so advertisement hoardings can be seen.

The Truman Show also shows that Carrey can be taken seriously. There's not a silly face to be seen or sound to be heard throughout the film. It is certainly his best outing to date, and it drew much critical acclaim and it's well worth a look in. Just remember when you pick your nose or scratch your arse, the world might be watching ....