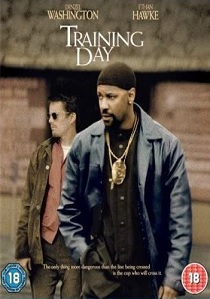 Jake Hoyt is a family man and ex-traffic cop who wants to move up in the world and become an LAPD narcotics officer. Detective Alonzo Harris takes on this rookie and over the next twenty four hours will show him the ropes. However, before Alonzo will take Jake seriously he's got to smoke a few of his many samples.

As the day progresses Jake sees Alonzo and his team at work and he doesn't like what he sees. Alonzo's policing methods are certainly questionable and almost corrupt. Much to Jake's annoyance Alonzo doesn't even bother with the small fry who deal on the street corners but prefers to go for the big guys.

However, there's more to this than meets the eyes as both parties seems to be looking after each other. When a big gambling weekend in Las Vegas doesn't turn out as expected, Alonzo finds himself in debt to some particularly nasty Russians. He decides to go and make a few house calls in order to make a few cash withdrawals. What Jake witnesses next is certainly not a drugs bust that goes by the book and he's going to be lucky if he lasts the day out.

The picture is bright and colourful with plenty of detail and no signs of artifacting or outlining. The searing heat of a bright Los Angeles day and the dark interior and nighttime scenes were handled perfectly, so much so that if you were to crank up the central heating a notch or two you could have almost have been on the street yourself. You'll be hard pressed to find a picture as good as what is on offer here.

The soundtrack is as equally impressive as the picture with the surround channels given a good workout. Whenever the action kicked in, so did the rear channel with bullets flying all around the soundstage. The dialogue is crisp and clear in the centre channel and the audio level is near perfect without any need to correct the volume throughout the film. Even those awful rap records become almost bearable.

The menu system is a static and boring affair although it has a dramatic score playing in the background. Navigation around the menus is simple enough, mainly down to the lack of anything exciting happening, but all the extras are easy to hand without too much hunting. The extras are reasonable enough with around twelve minutes of additional scenes and an alternate ending.

The Audio Commentary is good with the director revealing how they approached various police officers and gang members to get the scenes to look as real as possible. It's all rounded of with the now near standard, and reasonably entertaining, HBO Making of Documentary and Theatrical Trailer. There's also a couple of Music Videos, although they are only worth a look at if you are into rap music.

Overall this is a gripping, gritty and, possibly, realistic look at the world of narcotics law enforcement. However, I was initially suspicious of Denzel Washington's Oscar with recent awards being based on other decisions other than acting ability, after all Ethan Hawke was nominated too. But after watching Denzel in this film he really does manage to put in a convincing performance and thoroughly deserved it. Mind you, Ethan Hawke was no chump either.

Training Day certainly deserved all the accolades it received and it must be one of the best thrillers to make its way out of Hollywood for years. It definitely warrants a place in your collection.