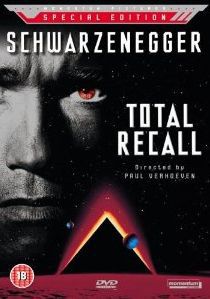 Douglas Quaid is haunted by the same dream every night about a journey to Mars and a mysterious woman. He decides to find out more about his dream by purchasing a memory implant holiday from specialist company Rekall. However, during the implant process something goes terribly wrong and before passing out he starts to remember being a secret agent fighting against the evil Mars administration. Trouble is, the memory implant procedure hadn't even started and his memories appear to be of another person. Fearing the adverse publicity that this psychotic event could bring the Rekall doctors refund Quaid's money and place him in a taxi.

Waking up in the back of the taxi and not knowing where he is or where he had been he heads for home. However, now all of his friends don't appear to be as they should and they are soon trying to kill him. Even his attractive wife Lori is attacking him with a kitchen knife. Are these real events or something he's imagining from his past or memory implant procedure? But after a mysterious person gives him a suitcase, and suggests that he should wrap a wet towel around his head, Quaid discovers that his life is not really all that is seems and his 'other self' has left him detailed instructions on how to get to Mars.

With his memory still rather patchy he relies on his alter-ego leaving him clues and when he arrives on mars he heads for a hotel. After discovering that he has left a piece of paper with the name of a bar and person in the hotel safe he heads for the seedier part of town. There he joins up with old flame Melina and the underground movement who plan to overthrow the Mars administration of Vilos Cohaagen and with the help of the mysterious, and psychic, Kuato they soon discover that Cohaagen has been hiding something from the population which would ruin his highly profitable businesses and change the face of Mars forever.

Given the amount of time Total Recall spends on Mars it would hard not to expect an image which is swamped in red. The Laserdisc and video versions of the film had a great deal of problems with the colour bleeding but the DVD handles everything with ease, resulting in a sharp and good quality image. The rest of the colours are rich and vibrant with a good level of detail and black levels whilst artifacting is kept to a minimum. However, on the minus side, the transfer does suffer from numerous dust specks and large amounts of print damage throughout. Considering that this is such an important film, and the film is trumpeted as being re-mastered, it's all rather disappointing.

From the moment the films opens to the superb booming Jerry Goldsmith score you know Total Recall is going to provide something special in the sound department. The 448 Kbps Dolby Digital 5.1 soundtrack is rich and involving with some good stereo steerage and separation plus some excellent surround effects. With explosions and gun fire galore all of the sound changes are continually kept occupied and even that much under used LFE channel is well utilised by both the musical score and on screen effects. You really couldn't ask for much more from an action film such as this.

The menu system is superbly animated with CGI graphics across both discs and is scored with various effects and music from the film. There's some nice transition effects between the menus, although if I was going to complain, they do take a little too long to appear as you dash about the screen and bleep at terminals as you log into the menus. Extras wise, with the main film accompanied by Spanish and German soundtracks and numerous other subtitles things are split over two discs with only two Audio Commentaries on the main disc.

I can't really comment on the audio commentary from Cinematographer Jost Vacano as it is all in German. However, although I couldn't understand a word that he was saying, whenever a flipped to his commentary track he was always taking so I can only assume that German viewers will find his comments interesting. For the rest of us there's the Arnold Schwarzenegger and director Paul Verhoeven Audio Commentary track. Originally recorded for the release of region one special edition it has become a little dated, but it's still an interesting one to listen to. Paul Verhoeven does most of the talking, with plenty of information about the origins of the script plus location and budget issues, whilst Arnold's interjections are just as good with the occasional gem of information, including a tale about a nasty cut he received to his hand during filming.

The rest of the extras are housed on the supplemental disc and on the whole they are a worthy collection which does indeed give the Special Edition tag some justification. First up is the eight minute Making of featurette. Essentially an old made for television special there's the usual American voice over, but it's also accompanied by plenty of clips from the film, behind the scenes footage, production information and a good interview with director Paul Verhoeven and other members of the cast and crew. For a television feature it's rather good and well worth a watch.

Next up is the thirty minute Imagining Total Recall featurette. Again director Paul Verhoeven is on hand as well as including plenty of input from Arnold Schwarzenegger, Co-screen writers Ron Shusett and Gary Goldman and many others including Rachel Ticotin and Sharon Stone. I wasn't expecting much from this featurette but with Verhoeven's enthusiasm and Schwarzenegger's surprisingly useful input (and great impression of the director!) it all adds up to a rather excellent featurette which will keep Total Recall fans very happy. It's certainly one of the best featurettes out there in DVD land. A bonus pat on the back is also earned by adding that very simple feature - chapter stops.

Next are the three storyboards Dream Of Mars, Climax Part I and Climax Part II. They run for a total of around six minutes and although I often question the use of storyboards, sighting them as mere filler material, these are actually of interest. Accompanied by the actual video and audio footage you can easily see just how the animated storyboards leapt from the paper to the big screen. It's just a pity there weren't any others storyboards available for show. The five minute Vision of Mars feature has Dan McCleese, chief scientist of the Mars Program Jet Propulsion Laboratories taking about the mysteries of the red planet and mans current and future exploration. Although not strictly applicable to the film, it does at least offer some interesting background to the planet and the various on going research projects.

The ten minute The World of Science Fiction Literature featurette is a bit of a strange one. Presented in French by Stéphane Bourgoin, a Paris bookseller for twenty years specialising in crime thrillers and fantasy and science fiction books, it is of limited value as he talks about science fiction books and their fixation with the red planet. Still, it does come equipped with subtitles and the French speakers amongst you may find it a little more interesting than most. The Virtual Vacations section allows you to select and enjoy a Rekall trip to the Dunes of Mars, Mountain Expedition on Planet Lumina 3 and Earth Beach. It's not exactly ground breaking stuff as it is simply a few minutes of various locations on earth set to eerie music or the ambient sounds of the video location.

The Photo Gallery and Conceptual Artwork sections are made up of a good selection of production stills and designs from the film. These features refused to work in my PC but were successfully accessed via my DVD player. The Teasers, Trailers and TV-Spots section is rather unsurprisingly made up of the usual set of promotional material. There's six thirty second TV-Spots whilst the Theatrical Trailer runs for around two minutes. It's actually quite a poor trailer and is simply a montage of clips from the film scattered all over the place whilst the one minute teaser is just that, teasing!

Before there were masses of CGI effects there was a time of simple plastic models and puppets. And Total Recall is full of them, be it the Martian landscapes or the various puppets of Arnold extracting things from his nose or eyes preparing to pop out of their sockets. Whilst these effects are pretty obvious they are never the less impressive and go on to prove that CGI special effects are not always the solution to every problem. Total Recall also claims to be one of the last big budget movies which used puppets and models rather than CGI special effects. Still, you shouldn't scoff, as the film won an Oscar for their special effects.

Whilst this release is a welcome edition to DVD it is a very late entry. There's already a vanilla release plus a region one edition with the same audio commentary as provided here. So why did it take so long for it to be released in a special edition format in region two land? It wouldn't have anything to do with the remake of War Of The Worlds now would it? Still, there's no point in complaining about it now as it's finally arrived and it's a must addition to your DVD collection. Not only have you Arnold in full flow but there's blood and guts galore and a definite disrespect to the human body which had the film censors coughing into their afternoon teas and reaching for the scissors.

No discerning Arnold Schwarzenegger will want to be without this special edition DVD whilst science fiction fans in general will be rejoicing at an edition of the film which finally does this film classic justice. Highly recommended.