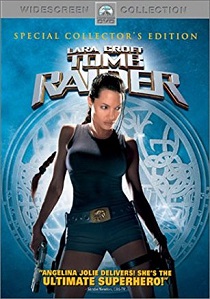 People have often wondered what would happen when the planets orbiting around the sun were in perfect aliment. There have been many tales throughout the ages of the destructive force of a mysterious triangle made out of a metal that fell to earth during the last alignment. It was a force so powerful that the object was broken into pieces and scattered around the world to protect humanity.

When a clock hidden in the Croft mansion mysteriously starts ticking a strange object is found hidden within its innards. It appears to be a strange clock or key and when a letter arrives from her long dead father explaining its origins, Lara is guided to her father's library.

She soon uncovers the awesome powers behind the object and the reasons why its secret must be protected. Unfortunately, a mysterious group called the Illuminati are already aware of its powers and they soon learn that Lara has an important object that will help them locate the pieces. Lara is soon in the thick of things and travelling the world to locate the pieces of the triangle before it falls into the wrong hands.

As to be expected with a big budget and special effects laden film the picture is first rate. The colours are rich and vibrant and during the many dark scenes in the various tombs and temples the bit-rate holds up with no signs of artifacting or outlining. Even the CGI generated statues blend in well with their surrounds and apart from the Buda and a griffin type animal they could be real.

The sound is just as good as the picture with a soundtrack that an action film truly deserves. During the many slow motion butt kicking scenes the musical score kicks in with a satisfying rumble. All of the channels are used well throughout the film and the surround channels are not neglected. The dialogue is crisp and audible and, apart from the musical score, the sound levels are well balanced.

The animated menus are superb and stick with the general theme of the film. With the film copying a lot of the action in James Bond you'll be unsurprised to learn that the menu system is very similar, but much smother, to the Bond discs. There's over an hours worth of reasonable extras on the Making Of the film, Deleted Scenes and a director's Audio Commentary.

There's also an interesting Easter egg on the extras menu with an interview with Jon Voight and Angelina Jolie. I actually found it by accident, just look around the 'Main Menu' option and you'll highlight a number of wavy lines. Select this for a short interview with the pair. There may be more so you'll have to do a spot of exploring.

I suppose Tomb Raider is better than the other computer game to celluloid conversions like Street Fighter, but it is still absolute rubbish. The plot is so ropey you could use it to support your garden runner beans. The only redeeming features are the beautiful Angelina Jolie, who was perfect for the role, and a DVD full of decent extras. However, that's still pushing it. Buyer beware.