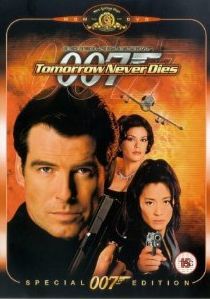 There's no news like bad news and bad news sells newspapers. When two Chinese fighters intercept a British cruiser off the coast of China the British captain is adamant that they are sailing in international waters and continue to ignore the fighters frantic messages to leave the area. However, there's something lurking in the water and when the cruiser is hit by a torpedo tensions between the two countries raise.

Tensions are dramatically raised when the new edition of the "Tomorrow" newspaper reports that the surviving sailors were murdered by the Chinese. The British become suspicious of Elliot Carver, the billionaire businessman and owner of the paper, as his newsgroup appears to be reporting the facts before they apparently occur.

Bond is sent in to infiltrate his organisation, but Carver is ahead of the game and soon identifies Bond as a British agent. Bond must stop Carver before he triggers a war between the emerging superpower and Britain.

The picture quality on both discs in superb, although the bit-rate is surprisingly low even in high impact scenes, a real testament to the excellent transfer done by MGM. It is bright and colourful with plenty of detail and certainly doesn't suffer from any artifacting or outlining.

The sound is also an excellent feast for your home cinema system with some superb LFE effects. The dialogue is crisp an easily audible in the centre and although the surround channels are not called for that often, when used they are used to great effect. This is especially evident during the opening scenes as the cruise missile streaked across the skies.

The nature of this action film called for plenty of LFE's and once the action starts the pictures will soon start dropping off the walls. The motorbike and helicopter chase through the suburbs of Shanghai is just brilliant. As the helicopter corners our heroes and attempts to perform some shredding, the rotor blades thump from all of the channels.

The Bond soundtrack is brought into the 21st century with David Arnold taking over John Barry's mantle. David manages to enliven the famous Bond theme and provides some welcome up tempo music during the action scenes, all which enlighten the overall sound experience.

The extras on the original version are a real letdown, the only thing of note being the commentary track, which is fairly informative, but not the best I've heard. Indeed a "whole extra" has been missed off the case! Its a pathetic "Also On DVD" trailer section which actually has the cheek to include Tomorrow Never Dies on it! However, apart from looking in a bargain bin it would now be difficult to obtain the original region two version, and since the special edition is far superior you'd only ever want to buy this edition.

The extras on the special edition are amongst some of the best on the Bond collection to date. Although there is no real "making of " featurette there's still an interesting Secrets of 007 television featurette instead. There's the usual collection of Theatrical Trailers, Teasers and Music Video plus an interesting Storyboard and SFX reel.

The animated menu is also one of the best in the series with clips from the film in the menu background plus clips from the cracking soundtrack As far as Bond films go, this is not one of the best with probably one of the weakest villains yet. Still, there's plenty to keep you on the edge of your seat like the excellent motorbike escape scene, but it smacks of commercialism. Lets face it, a film which has a Bond driving a BMW car then stealing a BMW motorbike out of a large number of other bikes can't be accused of anything else. It's ironic then that as BMW have monopolised the vehicles, that Carver industries should make a claim that their software division has released its operating system with hundreds of bugs, thus making people buy updates for years to come. Just like a certain monopolising company we all know and love!

To to sum up, not Bond's best outing and certainly not the best when it comes to Bond girls. It's just a pity that the lovely Teri Hatcher didn't get more screen time, although Michelle Yeoh does add that little extra oriental spice to the proceedings.