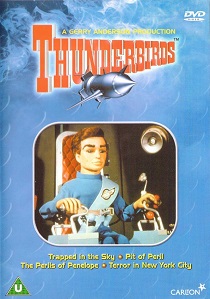 The Tracy family run "International Rescue, a top secret organisation that is dedicated to saving lives. Monitoring the airwaves from space they listen for distress calls and direct pleas for assistance from around the world. With equipment for every eventuality they can rescue people trapped underground, underwater and in outer space. With advanced equipment like this there are many people who would like to get their hands on the Thunderbird plans.

Each of the discs and the episode details are listed below. You can purchase each of the discs individually or as the box-set. However, the box-set has the edge with the excellent packaging and bonus disc. Best get hold of a copy whilst you still can.

The picture is actually rather good with an above average bit-rate throughout the episodes. Although the colours are a little bland, with the age of the film stock taking its toll, it has been wonderfully cleaned up and is a credit to Carlton. The only downside to this is that the picture is so clear that the puppet strings are clearly visible, and it can be quite distracting at times.

It was also quite a surprise to see that each disc had been re-mastered in Dolby Digital. Although you don't really notice this fact it is the explosions, of which there are plenty, that really do benefit from the re-mastering. The walls rattle and the explosions and other disaster effects engulf the whole sound stage and it came as quite a pleasant surprise.

Although the extras are only average, they do actually turn into a superb set over the complete collection. The box-set also contains a bonus disc The Thunderbirds Companion, which includes a number of documentaries with various interviews and behind-the-scenes footage.

For all of the expense in buying this box-set this disc really makes it worth it. Although Gerry Anderson got a little carried away with his vision of the future, and the wonders of nuclear power, the programme still manages to look futuristic.

The models are superb and I always felt sorry for the model designer who always had their creation blown to pieces in some dramatic disaster.