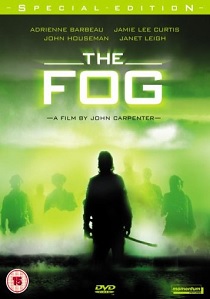 Antonio Bay is a sleepy and quaint little seaside town which is about to celebrate it's centenary. But it is a town that hides a grim and dark secret. Exactly one hundred years ago a cutter named the Elizabeth Dane became enveloped by a fog bank. Unable to navigate through the fog the crew of the ship were drawn towards the beach by the bright light of a bonfire. However, before they could reach the safety of the shore the ship ran onto rocks with all hands lost. Legend has it that should the fog ever return to Antonio Bay, so will the crew who will be looking for revenge on the people who took them to their graves.

As the midnight church bells ring out into the night and the 100th anniversary celebrations begin a mysterious glowing fog appears and, against the prevailing wind, heads towards the shore. As the fog approaches land strange things start to happen all over town. Building shake, car horns blare, house lights go on and off whilst local preacher, Father Malone, discovers an old journal hidden behind a stone which has become mysteriously dislodged from the wall.

Reading the journal, Father Malone uncovers the shameful secret of the towns founders and a tale of greed and cruelty to the inhabitants of the nearby leper colony. Now a hundred years later the latest generation of Antonio Bay must deal with their ancestors shame as they attempt to stay alive and out of the fog.

For a film nearly 25 years old the print quality is quite remarkable. However, it's fairly obvious that some form of digital tidying up has been performed, with various clips from the documentaries showing just how bad the print really was. Never the less, images are reasonably sharp throughout with the initial daylight scenes, especially around the lighthouse, being surprisingly good. Naturally, once the darkness comes things can become slightly trickier and the age of the print does mean that picture quality can, and does, struggle at times. But on the whole, things are more than adequate and life long fans of The Fog will be more than happy with the results.

Being equipped with an English and German 448Kbps Dolby Digital 5.1 soundtrack, as well as a Spanish and Italian 192Kbps Dolby Digital 2.0 soundtrack, it is not hard to see why the special features ended being on the second disc. However, although the soundtrack has been remastered to Dolby Digital 5.1 there is actually very little of interest to make it standout from the standard 2.0 track. The majority of the audio is concentrated in the centre channel with very little else happening in the other channels. There are a few ambient effects in the rear channels, but they're nothing special and once the tension starts to build they are only really used by the musical score.

The menu system on both discs are pleasantly animated and scored with the various menus well presented and easy to navigate through. With the large number of different language audio tracks the extras have pushed out onto a second disc. As a result the "Special Edition" tag has been rolled out in order to give this two disc set a better sense of value. However, these extras do form a valuable and worthwhile part of the film and as a result The Fog can be assured that the "Special Edition" tag has not been used simply for the sake of it.

The Tales from the Mist: Inside the Fog featurette is the better of the two documentaries whilst the original, and rather brief, 1980 documentary: Fear on Film: Inside the Fog repeats some of the previous information. Still, it's nice to watch, if only to see just how much the cast have aged. The main documentary also offers some useful insights into how the actual fog was produced and filmed whilst there's some interesting information on the scenes that John Carpenter added to make the film more scary (and it really did need them too).

Next up is a small Storyboard to Film Comparison. Although it only lasts for around a minute it's reasonably interesting and goes someway towards indicating just how important storyboards are to the director. However, it does highlight just how awful someone in the production team is at drawing. For the age of the film it's also quite remarkable that they've managed to trawl up some Outtakes, although they are neither interesting or funny. Things are rounded off with a Photo Gallery and Theatrical trailers and Television spots. If anything, these trailers really do underline just how dated this film has become.

After the likes of Halloween caused quite a stir in the horror world, The Fog is one of those creepy films which went on to terrorise many a person during the 1980's. In fact, it may well have been one of the very first horror films many a spotty teenager of the time saw. In the eyes of some, this is a horror classic, but if you compare it with the standard of today's horror film you'll quickly discover that it's not that scary after all. As a result, if you were originally scared stiff by The Fog and have subsequently not seen it for a number of years you may be rather disappointed by the memories. And with today's teenagers brought up with far more violent films, the various shock tactics employed by John Carpenter are so obvious you can see them coming a mile off.

Grumbles aside, you still have to label it as a classic of the horror genre. You also have to admire John Carpenter for his efforts and with his limited budget he does manage to create some reasonable special effects. And what better way to keep the make-up budget under control by keeping your ghostly murderers in the shadows? Still, if you really want to be scared stiff by a John Carpenter film then you should check out The Thing.