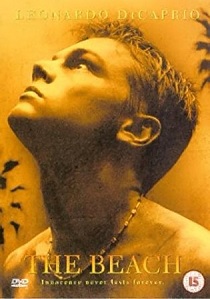 ReviewDramaAdventureLeonardo DiCaprio
Review Article Go back to homepage
Whilst backpacking in Thailand, Richard is given a map to the perfect beach by a suicidal man and together with two friends set out on a mission to find it.
Leonardo DiCaprio, Daniel York, Virginie Ledoyen, Guillaume Canet, Robert Carlyle, Peter Youngblood Hills, Jerry Swindall
Drama, Action/Adventure
2
1 Hour 55 Minutes
Thank you for supporting DVD365.net when you order using the link(s) below.
Buy DVD
Story

Although rumours have existed for many years over the existence of a perfect beach in Thailand, there has never been any proof, until now. One evening Richard is given a map to the beach by a spaced out nutter and he and a young French couple decide to set out to find this island paradise. On the way they meet another group of backpackers who have also heard of the beach and before Richard leaves he makes a copy of the map and leaves it in their room. After travelling by land and sea the island is in sight, but no boat will take them to island because it has been deemed as a site of scientific interest. With no boat they decide to make a swim for it.

After a long and arduous swim they reach island and discover one of the reasons why the island was kept such a secret. The island is covered with cannabis plantations guarded by a group of trigger happy Thai farmers who don't welcome outsiders. Eventually they come across a commune which houses people from all over the world. Richard and his friends soon settle into the commune and the daily chores of fishing and hunting. However, when Richard travels back to the mainland for supplies he meets his old friends who are determined to find the beach. Not put off by his warnings, the group head for the island and they ultimately upset the delicate balance between the pot farmers and the commune.

The picture is tremendous with a high bit-rate throughout the film with no signs of artifacting or outlining. The scenery on the beach and island is truly stunning with a fabulous amount of detail and so much clarity you could almost have been there yourself. The sound is first rate with crystal clear dialogue in the centre channel and some imaginative use of the surround channels, especially during the initial scenes in the city. However, it is the ambient jungle and ocean effects during the groups trip to the island which impressed me the most. The excellent music score is also worth a mention with some cracking tunes including the now classic All Saints track Pure Shores.

Although the menus are not animated, whenever a selection is made the new menu scrolls impressively into the view, even if I did feel than the menu selection process was a little slow and it became a little annoying after a while. The extras are useful with the usual trailer and All Saints video. However, there are a number of interesting deleted scenes and a director's commentary to keep the curious types happy.

If you put all the hype that went with the film a side, and the fact that if you've read Alex Garland's best selling book you'll discover the plot in the later half of the film goes totally AWOL with what can only be described as a strange cross between Apocalypse Now and The Lord of the Flies. However, it is still a really enjoyable film as the group find and enjoy their Eden until they ultimately destroy it. I'm certain Thailand will appreciate the extra tourism the film will bring.

Special Features
Related Articles
Inception, The Revenant, The Wolf of Wall Street, The Great Gatsby, Django Unchained, Inception, Shutter Island, Body Of Lies, Titanic: Deluxe Collector's Edition, The Departed, Catch Me If You Can, Catch Me If You Can, Once Upon a Time... in Hollywood, Once Upon A Time In Hollywood, The Wolf of Wall Street: Limited Edition
Born Equal, Go Now, Once Upon A Time: Season 3, Stargate Universe: Season 2, Flood: 2 Disc Extended Edition, 28 Weeks Later, Eragon, Once Upon a Time in The Midlands, The World is not Enough, Once Upon A Time: Season 7, The War of the Worlds, COBRA, Carla's Song: Limited Edition
The Program, Turning Tide, Last Night, Non Fiction
Scarborough
The Backwoods
Comments
RecommendedView