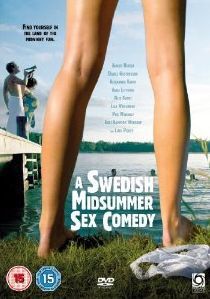 ReviewDrama
Review Article Go back to homepage
It's the longest day of the year in Sweden and there's some partying to be done. There's a beautiful waterfront house, a Swedish flag fluttering in the wind and a sailboat tied to the wooden deck below. Naturally, things aren't going to go to plan.
Olle Sarri, Lisa Werlinder, Alexander Karim, Anna Littorin, Luke Perry, Annica Bejhed, Daniel Gustavsson, Per Wernolf
Drama
2
1 Hour 26 Minutes
Thank you for supporting DVD365.net when you order using the link(s) below.
Buy DVD
Story

It's the longest day of the year in Sweden and to mark the occasion of the day where the sun doesn't set, perfect couple Emil and Suzanne have once again invited their old friends to their beautiful island home to help celebrate midsummer with a herring lunch, copious amounts of alcohol, a steaming sauna, some skinning dipping and, unlike the Swedish flag raised above the house, their underwear will most certainly be down.

So, expectations are set - Micke is constantly worrying about his highly pregnant wife and the fastest way to the nearest hospital (not easy when you're on an island). Eva is looking for some distraction from her recent split with Patrick and Sam, Emil's college buddy from the United States arrives with his own expectations of Swedish sin.

Wannabe singer-songwriter, and perpetual drunk, Anders hasn't told his wannabe pregnant girlfriend Maria about his low sperm count and hopes to solve the problem over the weekend. To top it off, Emil is planning a big surprise to lift the party to unprecedented heights. Let's just hope that everything is going to go according to plan.

The picture is bright and colourful with a good level of detail throughout. Although the contrast can be a little on the high side at times, it more than helps to highlight the twenty four hours worth of daylight of a Swedish midsummer's day (even if the film probably wasn't filmed then!). Never the less, with a good range of colours and, fairly unsuprisingly, a large range of flesh tones, put it all together with some solid black levels and a good level of detail, it becomes easy on the eye with no sign of artifacting or pixelisation.

Sound wise, the disc is presented with Dolby Digital 5.1 and Dolby Digital 2.0 soundtracks. The soundtrack itself is only really average, with nothing really exciting going on for what is essentially a dialogue based film. You could probably leave your expensive surround system turned off for this one. Never the less, the dialogue is crisp and clear with the Swedish-English accents easy to pick out - even if the native Swedish isn't (although I dare say that someone who can speak Swedish won't have such problems).

The menu is animated and scored with the sub-menu containing the single extra static and silent. Extras wise, there's nothing to get too excited about with the three minute featurette Interview with director Ian McRudden. Naturally, he talks about how wonderful everybody is and how great Sweden is, but there is very little information about the film. Still, at least the disc contains an extra when it would have been just as easy to release the disc with no additional material.

Not to be confused with Woody Allen's A Midsummer Night's Sex Comedy made back in 1982, A Swedish Midsummer Sex Comedy, or Äntligen midsommar! as it is more commonly known in Sweden, is the latest offering from director Ian McCrudden. However, I'm not quite sure where the word "comedy" fits into the proceedings and "sex" is a bit of a red herring (but probably delibrate!). Sitting down to watch the film I was expecting something akin to the likes of American Pie with plenty of playground innuendo and antics. However, I ended up watching something which was more like an episode of Eastenders - albeit with a few less clothes. Needless to say, it didn't raise a laugh and it appeared to simply concentrate on Swedish culture and its associated stereotypes.

The film pretty much concentrated on your average persons stereotypical view of Swedish people - and not forgetting Swedish films (although, not to the degree that you're probably thinking - or expecting!). And, yes, everyone appears to drive a Volvo, a beautiful blonde girl manages to loose her underwear in the opening thirty seconds of the film and everyone sits in a sauna, with the usual bit of gratuitous nudity, hitting each other with tree branches before leaping into the lake. All you'd need to finish things off would be a passing plumber with an iffy moustache, large muscles and the tendancy to get all sweaty and need to remove his clothes. Still, the only none-stereotypical part of the film was the fact the actors could all speak perfect English and they could switch between English and their native tongue with such ease that you hardly noticed whenever the subtitles appeared.

The only way I could see Luke Perry appearing in this film was because director Ian McRudden claims that he is a friend. Sure, he may have disappeared off the radar since his dizzy heights of Beverly Hills 90210, but A Swedish Midsummer Sex Comedy is not going to get him back onto the map. It's also not the sort of film which is going to be viewed much in America either - especially since half of the population have probably never heard of Sweden, let alone be able to find it on a map!

Whilst the Swedish-American cast is more than likeable, with some good acting, it still suffers from rather predicatable plot line and character personalities. From the outset, you can tell who likes who and what the outcome of the weekend will be. It's all too "lightweight" for my liking and I'm not really sure which market this title will appeal to. Sure, it'll probably be picked up by the natives, and a few people may get misled by the title of the film, but other than being yet another a tale of friendships lost and regained, it does very little to dispell your average stereotypical views of the Swedish - even if the film is trying to make fun of them.

Finally, who knew that Swedish women don't wear panties on Midsummers Eve? Is this yet another stereotypical view of Swedish women - or do we need a field trip to find out for ourselves...?