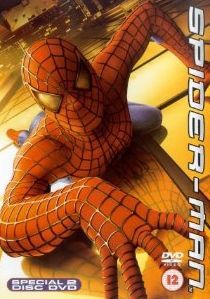 Peter Parker is one of those nerdy school boy types who has few friends and many enemies. He longs for the affections of Mary Jane but he can never pick up the courage to ask her out on a date nor does she really acknowledge his existence. However, Peter Parker's life is about to dramatically change during a school outing to a local research centre and an encounter with a spider.

When a genetically modified spider escapes from its box and bites Peter on the hand he starts to undergo a number of amazing changes. Not only does he no longer need his glasses but his physical appearance has also drastically changed from his former weedy frame to muscular physique. The changes are not just only on the outside as he's also developed a spider-sense warning him of any danger around him plus the ability to spin webs - fortunately not out of his rear end.

Peter doesn't really appreciate his new found powers until he's desperate for some money to buy a car to impress Mary Jane. Discovering that he can win $3000 by entering a wrestling competition he designs himself a costume and heads downtown. Easily beating the brute in the ring he finds himself being paid just $100 for his efforts, but he feels much better when the promoter is robbed of his daily takings.

Unfortunately for Peter his life goes even further off the rails when the same robber murders his uncle and steals his car. Distraught, he decides it's time for revenge on the robber and the other criminals of New York. However, there's one criminal who's going to be harder to trap. Norman Osborn, the famous industrialist father of Peter's best friend, has dosed himself with an experimental serum. Naturally, all doesn't go well and Norman is transformed into the violent Jekyll-and-Hyde character, the Green Goblin, who soon has a grudge against the new superhero known as Spider-Man.

The picture is bright and colourful with a fair amount of detail and a high bit-rate throughout the film. From the dark and gloomy exteriors to the bright and colourful indoor scenes everything is handled with ease. However, this certainly doesn't mean that everything is perfect. At times I felt that the picture could look a little grainy and there were a few occasions when there were a few dust and dirt specks. For such a major film the picture and massive DVD release, this is a bit of a let down.

Some of the computer effects were also just a little too obvious. This was certainly visible during the scenes when a computer generated Spider-Man scales the side of a building whilst in pursuit of a car jacker. The movements and textures of the CGI Spider-Man just didn't look right. Mind you, that doesn't mean that the other CGI effects in the film weren't any good either, because the spider flight through the streets of New York was more than impressive.

For an action film the sound is rather disappointing and for some strange reason this is always the case when Danny Elfman provides the musical score. The dialogue is crisp and clear in the centre channel whilst the surround channels and low frequency effects only seem to be used during the action scenes. However, the musical score could be a little overpowering at times which ended up drowning out half of the action scenes.

The menu system is certainly impressive and innovative. Whilst the main menus on both discs are scored and impressively animated, the subsequent menus generally appear with a cut scene from the film or some artwork in the style of the comic books. It's definitely one of the better menu systems available on DVD. However, once all the visual splendour has been dealt with the actual navigation around the menus can be a bit of a nightmare. It can be near impossible to find the tiny selection cursor and once you do it can then be hard to actually work out just what you are selecting.

There's certainly plenty of extras to keep the action fans happy, so many in fact that it is all housed on a two disc special edition set. Whilst there's a Directors Commentary and interesting popup Factoids on the main disc, the second disc are where all the extras live. There are a number of featurettes, including an HBO making of special plus a long and cringe worthy E! Entertainment special which is far too Americanised for my, and I guess for many others, taste.

There's also some Outtakes, Screen Tests plus a couple of profiles on director Sam Raimi and composer Danny "make it sound like Batman" Elfman. The most interesting section of the second disc must the comic book style Web of Spider-Man section which concentrates on his roots. Fans of Marvel comics will also be pleased to see Artists Galleries from both the film and the comics, Spider-Man comic archives and a rogues gallery containing a rotating 3D image and background information on all of his foes. It's all rounded off with some background information on his girlfriends. It's certainly a unique and interesting look at films character and goes someway to explaining Spider-Mans phenomenal box office success.

Spider-Man was one of, if not the, biggest box office smashes of 2002 which resulted in a brilliant year for all home cinema fans. Its success was more unusual by the fact that there were no real 'A' list actors of note in the film. Don't get me wrong, they all do a good job and there's certainly nothing wrong with Tobey Maguire or Kirsten Dunst, just that they are not the first names that would pop into the mind. It's most definitely a case of a film character driving the hype behind the film, and quite rightly so.

This film is certainly one of the better comic to screen transitions and whilst it doesn't fully adhere to its comic book roots it has a wide appeal to all audiences. It's sure to be a DVD blockbuster for years to come. Stroll on the sequel. Highly recommended.