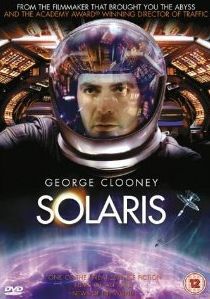 When strange goings on are reported by the crew of Prometheus, a research station orbiting the planet Solaris, psychologist Chris Kelvin is dispatched to investigate. His mission is to interview the terrified crew and then report back to earth and the stations corporate owners as to whether the planet is still viable for exploration. However, when he arrives at the station he quickly uncovers signs of violence and a number of corpses in cold storage.

Interviewing two remaining crew members he discovers that the crew have been encountering a host of strange phenomena, including eerie visitors who far from being in their dreams seem all too human. Confused by the goings on he decides to sleep on the matter and make further investigations in the morning. Awaking from a troubled sleep Chris is shocked to wake up next to his wife Rhea. This would not be all that troublesome if it wasn't for the fact she hadn't travelled with him and that she'd actually committed suicide a number of years back. Not sure of who she is, or what is going on, he places the mystery visitor into a capsule and ejects her into space.

However, the following night Rhea is back and with no real memories of who she really is she's just as confused as Chris. But as Chris digs deeper he realises Rhea doesn't intend to do him or the rest of the crew harm, but she is a completely self-aware being created from his own memories. Although warned against it by the crew, Chris starts to reform his relationship with Rhea with the intention of taking her back to earth. But without any memories of her own Rhea soon becomes troubled about her existence and the events that led up to her death.

One of the most impressive features of Solaris is the picture. If there was ever an award the perfect DVD picture then this film must surely be in with a chance of winning. Although I viewed the film on a widescreen CRT television, I'm sure that on either a larger plasma television or projector it would look simply awesome. Whilst the interior colours of the space station and the locations on earth are relatively low key, with an almost bleached look to it, the actual CGI of both the space station and the planet of Solaris is simply stunning. The colours are beautifully rich, crisp and textured with an immense amount of detail whilst the surrounding depths of space are a deep and cold black.

The bit-rate remains high throughout and there are no signs of any artifacting or outlining. There are a few occasions when there is a slight hint of aura around Clooney's spacesuit, but the crispness of the picture really does make it difficult to reproduce a pixel perfect scene. Stanley Kubrick's 2001 cinematography may have been good, but Solaris is better and in years it is sure to become a classic.

The soundtrack is as equally impressive with clear and precise dialogue in the centre channel and some reasonable, albeit sparingly, use of the surround channels. However, where the soundtrack does rank highly is the superb musical score. From the moment Chris approaches the planet and orbiting space station the score really heightens the spender and the mesmerising aura of the planet. There are not many scores that can add an emotional element to the film, but once Chris starts to struggle and interact with his visions the haunting soundtrack really does help you feel his pain.

The extras are reasonable enough, with the highlight being the audio commentary from the one and only James Cameron and director Steve Soderbergh. It's not often you get a commentary from either director, so to have both men providing an extremely interesting audio commentary is not only a rarity but it's a bit of gem. It's really surprising that during filming these two talented director's didn't come to blows with their opposing views and visions.

The HBO special is interesting enough with some good background on the film and its original origins. The second featurette is just as good as the first, although it does repeat a lot of information and clips from the HBO feature. One of the most interesting clips is the screen test from Ulrich Tukur. Although you can't see him, you can hear him reading a sonnet to his rather bored looking dog and filming its response. Needless to say, the producers were impressed with his methods and he got the nod.

There's no doubting that Solaris is George Clooney's finest performance to date and the ladies will love the fact that his rear is on show too (alas, the British censors wouldn't cut the scene out). However, I thought that the performance from Natascha McElhone as Rheya was superb. Not only does she look stunning, but her acting is first rate and in my opinion surpasses that of Clooney. I'm sure her performance will now springboard her into the Hollywood mainstream.

Solaris is a bit of a strange film to classify. Although it is set in space it can't really be classed as a science fiction film as the love story element of the film takes precedence over everything else. Sci-fi junkies will certainly be disappointed with the lack of action whilst fans of romantic films may be a little perturbed by the science fiction element. But don't let that put you off, even if you don't want purchase a copy of the film you should definitely consider a rent and seeing Solaris for yourself.