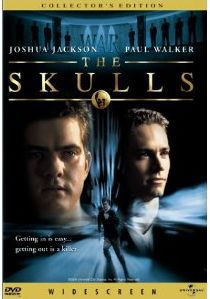 Luke is a former hoodlum who has turned over a new leaf in order to make something of his life. He now works at the university cafeteria and is studying hard with ambitions to go on to Harvard Law School. The only thing that stands in the way of his ambition is his lack of funds, however, there is one possible solution to his financial predicament.

Along with best friend Will, and girlfriend Chloe, they contemplate his chances on being chosen to join a secret society on the campus called The Skulls who are known to pay for law school bills. Then one night he gets a phone call and soon finds himself in the midst of the Skulls initiation ceremony.

The Skulls are governed by rules that ensure loyalty to members, a willingness to do anything to protect the members and protecting the integrity of the Skulls by not divulging any of the proceedings to those on the outside. These are brought into play when a fellow pledge, and Skull soul mate, is caught up in a murder and Luke wants to expose the cover-up. Trouble is, he is now up against some of the most powerful men in the country.

The picture is good with a reasonable bit-rate through the film. There is no sign of artifacting and the picture is plenty of colour and definition. The night time scenes are handled well enough and the poorly lit indoor scenes are just as good. The sound is a little disappointing with not much going on in the surround channels of any note. With the film being heavily dialogue based it is fixed firmly in the centre with no bleeding to the other channels.

This is an OK film with average acting from a relative cast of unknowns. There are quite a few interesting twists and turns which force you to change your mind on who are the good and bad guys. Worth a viewing. However, one thing did puzzle me some what. For a such a secret society, why do they have a bright neon symbol stuck on the roof of their chapel?