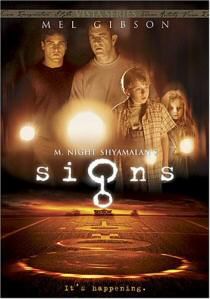 ReviewScience FictionThrillerFantasy
Review Article Go back to homepage
When a farming family discover a crop circle in their field they suspect that the local idiots have been up to no good. However, similarly designed crop circles have started to appear all over the world and strange lights have been seen in the sky... Warning this review contains a plot spoiler
Mel Gibson, Joaquin Phoenix, Rory Culkin, Abigail Breslin, Cherry Jones, M. Night Shyamalan, Patricia Kalember, Ted Sutton, Merritt Wever, Lanny Flaherty, Marion McCorry, Michael Showalter
Suspense/Thriller, Science Fiction, Fantasy
1
1 Hour 46 Minutes
Thank you for supporting DVD365.net when you order using the link(s) below.
Buy DVD
Story

Graham Hess lives in Bucks County, Pennsylvania, on a farm growing corn. He is also a lapsed minister. Since the death of his wife in an accident he has lost his faith and is sickened by the fact that someone he loves so much has been taken away from him and his two children.

When a 500 foot crop circle appears in the middle of his field during the night he suspects that the local idiots have been out and about and calls the police. However, the crop circle is perfect in every way and the police suspect that even the locals couldn't have done it, after all they have enough trouble standing up let alone making crop circles. Perhaps it really was made by extraterrestrials, especially since their two dogs are acting strange and barking at shadows in the night.

During the following night Graham hears strange noises outside so he and his brother decide to go outside to confront the locals who have returned for more mischief in the fields. When the mystery person manages to jump onto the roof of the house and then disappear into the crops he decides to venture into the fields only to be startled by something making strange noises and moving around in the dark. What's more, the old baby monitor now being used by his youngest son, Morgan, to detect these mystery aliens is picking up strange signals. Is it really just static?

With all this excitement happening so close to home Morgan buys a book on aliens and quickly comes to the conclusion that a hostile alien invasion is about to occur. Tsk, these youngsters and their vivid imaginations. But, when television newscasts start reporting crop circles appearing all around the world, strange lights appearing over cities and an apparent alien being caught on camera, the family start to sit and watch the broadcasts in fear and dread.

With night fall approaching fast, and an apparent alien landing site situated just outside their house, they board up the doors and windows and decide to sit the night out. Soon after dark strange shadows appear at the windows and menacing hands start trying the door handles. Perhaps now is the time for Graham to rediscover his religion.

The picture is bright and colourful with the Pennsylvanian scenery looking particularly rich and vibrant and a bit-rate remains at the constantly high level throughout. But with the main plot of the film taking part at night or in dimly lit locations, all eyes are on going to be on the contrasts and black levels. And its good news as the blacks remain rock solid at all times and there's no signs of any artifacting or outlining. This is certainly evident during the scenes when the family is holed up in the cellar. Mind you, there is still the occasional dust scratch on the print, but its nothing to get worked up or worried about.

To be really successful this film needs to be able to deliver a creepy atmosphere. Fortunately the THX approved soundtrack excels and contains some close and claustrophobic effects that will have the hairs on the back of your neck lifting out of their follicles. The dialogue is crisp and clear and well directed in the centre channel whilst the stereo steerage is impressive along with a hauntingly effective musical score. It would have certainly been interesting to hear just what a DTS soundtrack could have offered.

The menus are nicely animated and eerily scored in keeping with the same creepy atmosphere presented in the film and the extras are just as good as the previous M. Night Shyamalan releases of The Sixth Sense and Unbreakable. There's a number of deleted scenes, with one particularly creepy one which, in my opinion, should have been left in the film. Also include is a six part documentary lasting just under an hour which can also be watched in one go. There's also a multi-angle feature using the films storyboards plus Shyamalan's first alien film. He certainly doesn't mind being embarrassed then; but I guess people have to start somewhere. Although the documentaries are detailed enough it really does lack an audio commentary from Shyamalan.

After The Sixth Sense, Shyamalan was hailed as a brilliant writer/director with a bright future and blank cheque books ahead of him. When Unbreakable was subsequently released people flocked to the cinema with high hopes but ultimately left disappointed with the results. Fortunately, I was not one of them and thoroughly enjoyed both the theatrical release and the resultant DVD. Shyamalan managed to fool us yet again with the evil plot twist so this time I prepared myself for the challenge.

I picked up the Signs DVD with high hopes and things were going well. When the aliens entered the house and could be heard running about and scratching at the doors I was on the verge of wetting myself. "Brilliant suspense" I thought, as I started to prepare myself for the ultimate plot twist. But what started off with so much promise and spine chilling suspense ended up being a cross between War of the Worlds and The Night of the Living Dead. All those breathing exercises and meditation was for nothing. What a real disappointment it all turned out to be, but perhaps that was the twist?

I suppose it was made on the fraction of a budget reserved for a big Hollywood blockbuster, with the majority of the money pot no doubt going to Mel Gibson, but the CGI effects were just awful and the way the aliens just gave up and went home was just plain stupid. Where were all the alien ships zapping people and buildings? I know if I was an invading alien I'd have been confounded by the capitulation. It's a real shame as Shyamalan produced some brilliantly filmed scenes with some superb panning and zooming techniques, only for it all to end up looking like an episode of the X-Files.