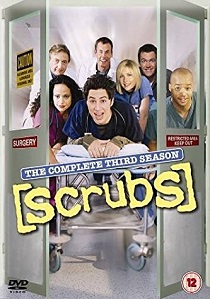 I've detailed Scrubs' background in my previous reviews of seasons one and two. Suffice to say, it's a sitcom that combines all aspects of humour - wit, slapstick, random pop culture references and aside gags - to create one of the most compulsively watchable shows on the box. Every episode features two or three plots that combine a unique brand of storytelling (first-person narration by JD) with consistently hilarious jokes and the odd dramatic or emotional scene. It may sound like a combination that would never work; never entertain, but it does. Very well.

Alongside these three we meet J.D.'s mentor, Dr. Perry Cox (John C. McGinley), as damaged a character one can possibly be and prone to lengthy humorous rants. He also always refers to J.D. by a girl's name, and does to his best to stay away from personal problems the younger residents get into. His ex-girlfriend and mother of his son, Jordan Sullivan (Christa Miller), also shows up here and there, typically simultaneous humiliating or offending Cox and J.D. in one fell swoop with her razor-sharp insults. There's also Dr. Bob Kelso (Ken Jenkins), grumpy old hospital manager; Carla Espinosa (Judy Reyes), Turk's Hispanic girlfriend; the Janitor (Neil Flynn), a strange character who has a compulsion to insult or scare J.D.; and Ted (Sam Lloyd), nervous hospital lawyer and lapdog of Kelso. There are also many other minor characters who serve mostly to serve a punch line or as foils, comic or otherwise, to the main characters. This season sees the likes of Michael J. Fox, Tara Reid and Brendan Fraser guest-star, whilst recurring character Sean Kelly, Elliot's dolphin-trainer boyfriend, (played by Scott Foley) also gets maximum screen time this season.

Several episodes this season were "super-sized" during original run (i.e. had around 5 more minutes of footage to pad the episode out to 40 minutes on network TV); these are presented uncut here. They are noted in the list below.

Season three of Scrubs is not its' strongest, and indeed I'd argue it's the weakest out of the first four seasons (though still brilliant). But, like season 1, season 3 features one standout episode; twenty minutes of television that will go down in history as the best of the best. Season 1 had My Old Lady, season 3 has My Screwup, the most perfectly directed, scripted and produced episode of the show's history. The episode packs a deep emotional punch, and the twist at the end almost shocks into submission. It's an episode deservedly cited as Scrubs' best on many occasions.

The show's main focus, of course, is not emotion, though; it's humour. And Scrubs is full up to the ears with comedy of all kinds. Jokes emerge from everywhere: Cox's hilarious rants; J.D and Turk's incessant pop culture references; Elliot's neuroticity; Kelso's anger; Ted's weediness; Todd's constant innuendo; the Janitor's obsession with harming J.D.; the random aside gags that every episode features. It's hard to define the most consistent source of humour for the show, but I'd argue Dr. Cox's rants are the best; filled to the brim with witty insult after witty insult, you often have to wind back to catch what you missed from laughing so hard.

This season sees more running plots than seasons prior; the most important development being the engagement and marriage of Turk and Carla, which as you may expect, is packed with twists and turns. There's also the running plot of Elliot's new boyfriend, Sean; and the continued plot of Cox and Sullivn's baby. Of course, there are plenty of self-contained episodes too; the aforementioned My Screwup (featuring Brendan Fraser); the excellent My Butterfly which examines the effect chaos theory really could have upon life in Sacred Heart; My Porcelain God, the tale of the "roof-toilet"; and His Story II, a Turk-narrated venture. Each episode features several sub-plots, so the shows never veer off into boring or clichéd territory, and gags come quick and fast; lightening the mood during dramatic scenes but never ruining the moment.

First and foremost, I have to say, this feels like a rushed release. In addition to the fewer extra features (detailed below), several of the episodes have technical glitches and mastering errors in, that whilst minor, are rather annoying. For example, I notice several frames here and there jumping; a video glitch comparable to that you might experience when streaming on dial-up connection - blocks and pixels jumping around; and certain points on disc 3 actually cannot be read by some DVD players. The glitches all last a mere second or less but are still rather annoying. As my set was from the first print of the set, however, it's these errors have been corrected by now. Aside from the glitches, video is acceptable, improved upon season 2; grain is visible from time to time, but no digital enhancements distracted from the viewing. Colours are nice and sufficiently bright.

Audio is fine; the DD2.0 track won't blow your mind but it's sufficient for dialogue-heavy sitcoms such as Scrubs. The sound effects and music used are rich and sharp and the track is as good as one would hope for a 2.0 track - thankful, as music plays a large part in Scrubs. Audio is available in English, French, Italian and German. Subtitles are available in ten European languages, including English for the hearing impaired, all of which except for the English are available on the extensive special features too (annoying they missed English out - bad news for the hearing impaired on that front!).

The menus are well-designed, look great and are easily navigable; they are fairly similarly designed to seasons 1 and 2. Various versions of the opening and closing themes play on different menus. Strangely, once again Buena Vista have not included the episode name on the menus, simply numbering them, which can be quite confusing, especially if you're unfamiliar with the episode. I hope they correct this practice - on all of their TV-DVDs - in the near future. Thankfully, an insert with episode titles (though no descriptions, disappointingly) in included in the three-panel DigiPack the set is presented in; one pane holding the flyer, the remaining two holding two discs overlapping - a space saver, if slightly annoying and unwieldy.

Bonus features this time, whilst still present, are severely cut down - a disappointment considering the excellent extras on the first two seasons. No commentaries are featured, while only a smattering of featurettes are present.

The six Featurettes included add up to just over 40 minutes. We have Don't Try This At Home, a look at the stunts on Scrubs; Twist and Shoot, director interviews; Long-Term Residents, a guest-star featurette; What Up Dawg?, a look at the dogs the cast and crew have on set; Scrubs Factor, a featurette about the on-set Fear Factor the cast play; and Robert Keeps Talking, another interview, this time with Robert Maschio, who plays Todd. All are 5-10 minutes long.

Once again, anyone who enjoys Scrubs will enjoy this set: the episodes are outstanding. Unfortunately the DVD package is a step down this time, but the presentation is still acceptable on the AV and bonus feature fronts. For fans of Scrubs (and there are many) this is once again a no-brainer; for those new to the show, catch it on TV before taking a risk with an entire season.