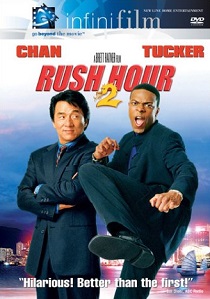 Detective James Carter is finally on leave and this time he is the fish out of water in Hong Kong with his new friend Lee showing him around. All that James wants to do is party and meet with some nice oriental women. However, things are about to change for the pair when the American Embassy is bombed and two people killed. Suspecting that the triads are involved Lee starts following up leads.

Unaware the Lee is back on a job Carter is enjoying life following him around the bars and clubs of Hong Kong whilst he tracks down the triad gang lord, Ricky Tan, who may be responsible for the attacks. Lee's cover story is soon blown when the police station is also targeted by the mysterious bomber and Lee and Carter find themselves back in action. However, things soon get over their heads as the pair stumble upon a massive counterfeiting plot by the triads and a Los Angeles crime boss.

The picture is bright and colourful with an above average bit-rate throughout the film. With many of the scenes taking place at night or indoors the picture is pin sharp with no artifacting or graininess evident. However, certain scenes could be softer than others and there was the occasional dusk speck.

The soundtrack is available in Dolby Digital and a far superior DTS ES version. The dialogue is clearly audible in the centre channel and there's no need to keep adjusting the volume to keep the neighbours happy, although whether they can put up with Chris Tuckers screeching is a different matter. When the action does kick in there's plenty of activity in the rear channel and the occasional LFE rumble from the subwoofer once there's an explosion.

Although the Dolby version is more than capable for this genre of film the DTS version excels in the sound field separation and depth. Although the arguments over the amount of compression on a DTS soundtrack continue, the difference between the DTS ES and Dolby Digital soundtracks is clearly audible in the first two minutes of the film and should be the preferred choice for this film.

The menus are reasonability animated and scored but they can hardly be classed as being that imaginative or budget busting. As with previous IniFilm releases there are extras galore, so many in fact that it will take an age to find your way around them. However, that is the problem as the extras are tucked away on a single sub-menu that wasn't that particularly easy to find.

Once you find the extras you'll be spoilt for choice with the vast array on offer, with the outtakes and deleted scenes probably being the best. The IniFilm feature, once enabled, will pop up a dialogue box mid film and allow the viewer to jump to some additional information or featurettes. I soon got annoyed with this and turned it off and it is probably more suitable for a second viewing of the film.

The film certainly isn't a good as Rush Hour and, as with most films of this genre, the plot is a little thin to say the least. However, they did manage some plot continuity by continuing the story from the end of the first. It obviously worked as the film managed to rake in over $200 million in the US alone. I'm sure there's going to be a third outing for the pair, but let's hope next time they work on the plot.