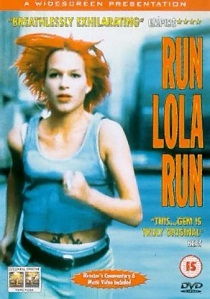 ReviewCrimeAdventure
Review Article Go back to homepage
Manni is a small time courier working for a big time gangster and he's in hot water. He accidentally left the cash from a mob deal on the subway and has only twenty minutes to deliver 100,000 marks to his unforgiving boss.
Franka Potente, Moritz Bleibtreu, Herbert Knaup, Nina Petri, Armin Rohde, Joachim Król, Ludger Pistor, Suzanne von Borsody
Action/Adventure, Crime
2
1 Hour 17 Minutes
Thank you for supporting DVD365.net when you order using the link(s) below.
Buy DVD
Story

Lola was supposed to pick up Manni after he collected some money for his boss, but she failed to turn up after having her scooter stolen. In order to meet his boss in time Manni is forced to take the underground. However he is spooked by some security guards, leaves the train and forgets to pick up his parcel of money.

Desperate, he calls his girlfriend, Lola who is the only person who can rescue him from his remorseless boss and certain death. With only twenty minutes to find the cash, and the seconds ticking away, the smallest decisions made by the pair become life altering.

The same story is told three times, and from three different angles, in a "what if" scenario with fate dealing all the cards. As Lola bumps into people on her way to meet with her boyfriend we see into their lives and witness the future path laid out for them. For example, in one particular person it is shown as death, a lottery win and finally finding God.

For a relatively low budget film the picture is bright and sharp and has a reasonable bit-rate throughout. Nevertheless, it is still not perfect as the picture is occasionally grainy, however it only seems to match certain scenes within the film and may point to lower grade film stock or equipment used during filming.

Although the soundtrack is in German, and rather bizarrely all the music is in English, there is a choice of English subtitles or an English dubbed soundtrack. Normally I hate films with subtitles and certainly avoid dubbed ones, but the English dubbing on this disc is rather good and after a while you don't really notice it. However, I must admit that some of the English voices are a little ridiculous.

Apart from Mercedes, few good things have come out of Germany and their film industry is certainly not one of them. Apart from Das Boat nothing has made an impact on the movie scene. However, this has all changed with Run Lola Run and director Tom Tykwer, who also wrote the script, must have turned a few heads in Hollywood. He uses every trick in the directors book with split screens, animation and slow motion. It really is a master piece and you can hear his many ideas in the directors commentary.

The film contains a really "kicking" techno beat which is synonymous with the German dance scene. If you like techno music then the soundtrack CD is certainly worth tracking down and the main musical score from the film spent many weeks at number one in the German charts. One of the extras on the disc is the music video Believe by Franka Potente. Although not the best video around, it certainly has to be one of the best dance tunes available on DVD today.