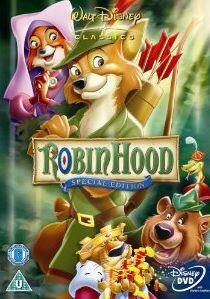 Retelling the classic English legend as only an animated Disney feature length cartoon could do, the heroic Robin Hood, his trusted companion Little John and his devoted band of merry men, seek to rob the rich in order to feed the poor people of Nottingham. In the absence of King Richard, who has left the country to fight in the crusades, the local population is currently being taxed until the pips squeak (sounds just like the current government!) by Prince John, and his trusty followers Sir Hiss and the Sheriff of Nottingham. Naturally, whilst a hero to the local people of Nottingham, Robin Hood is also number one on the wanted list and so the Sheriff decides to run an archery tournament - with the prize of a golden arrow - in order to identity and capture the elusive expert archer and bandit.

Sneaking into an archery tournament disguised as a heron, Robin wins the competition with ease - even avoiding the Sheriff of Nottingham's dirty tricks. However, Robin's disguise is rumbled and chaos breaks out as the king's soldiers try to capture him. However, along with the golden arrow and childhood sweetheart Maid Marian, Robin finally manages to escape the clutches of King John. But this is one humiliation too many for King John and he orders taxes to be tripled, with any citizen unable to pay jailed. Needless to say, the jails are soon full to brimming with the ever growing number of citizens unable to pay their taxes. If this doesn't bring Robin Hood out of hiding then nothing will.

But Robin Hood is still not showing his face, so when Friar Tuck is arrested after trying to stop the Sheriff from taking money from the church's charity collection box, King John plans to hang Friar Tuck in the hope that he'll finally come out of hiding. Fortunately, Robin gets wind of plot ahead of time and manages to rescue the Friar as well as the other villagers, even stealing back the prince's ill-gained gold from under his nose. But with King John's obsession with Robin Hood coming to a head, will the king finally get his chance to capture and kill Robin Hood?

Given the age of the print, plus the fact that it has gone through a digital restoration process, the transfer is crisp and clear with a good level of detail throughout. Whilst there's some nice colour depth and detail, the colours aren't as rich and vibrant as I'd hoped, but then again, I suspect that the original wasn't as detailed either. Mind you, for a generation of Disney children brought up on a colourful diet of The Lion King and Aladdin, anything less than a full rich and vibrant offering is likely to disappoint. However, the digital cleansing operation performed here has been a complete success - with few signs of dust scratches or other forms of print damage on the transfer. It was certainly money well spent and a valuable procedure in order to keep the material in pristine condition ready for future generations of Disney fans.

The back of the DVD case trumpets the fact that the film is now presented with a remastered 384 Kbps Dolby Digital 5.1 soundtrack - presented in English, Spanish and, rather bizarrely, Arabic. Whilst it's no doubt a hundred times better than the original mono track - which unfortunately I'll have to assume because it's not included here - it's still nothing really to write home about. In fact, with the sound pretty much locked in the centre channel throughout the entire film, you could pretty much do away with the surround system for the duration. However, to be fair to the folks at Disney, the dialogue is reasonably crisp and clear in the centre channel and it at least attempts to bring the film more to life than a mono track. Still, I just can't wondering whether the attention to detail wasn't as thorough as it could have seen for - say - a more popular film such as Dumbo or The Jungle Book.

The menu is scored and pleasantly animated with the main menu containing clips from the film. The disc also includes Disney's Fast Play feature that automatically plays a number of trailers, the film then a selection of extras. I'm not quite sure of the purpose of this, after all things could be speeded up if it weren't for the hundreds of copyright messages, various company logos and advertisements for other films at the beginning of the disc. But then again, short of bribery and a trip to McDonalds, anything to keep the kids quiet for an extra few seconds must be a welcome bonus. Extras wise, it's all very child friendly - which, let's face facts folks, is hardly a surprise for a Disney title.

Before you've even had time to take the disc out of the shiny and impressive holographic slipcase, the little paws in the household will be wanting to grab the Disney Fun Activities booklet which, although containing a shameless plug for some of Disney other titles, includes various puzzles and colouring in activities. Once you get to the extras on the disc, the main extra of interest is the Deleted Scene which is an alternative ending that never get made - perhaps due to budget issues? As a result, it appears as a storyboard with dialogue - albeit not the original cast members - and lasts for around five minutes. However, given the dialogue and unknown origins of the storyboard, I'm not sure whether this is the original or something exclusively created for this disc.

For all you Karaoke fans out there, next up is the Disney Song Selection section. Quite why you'd want to sing along to the rather unmemorable songs from the film, the Karaoke feature allows you to sing along with the Oo-de-lally, Love and The Phony King Of England ditties from the film. You can also opt to watch the entire film and then burst into song at the relevant points. However, it's a bit of a cheat really as it's simply the original film with subtitles. Next up is the Robin Hood's Merry Games section. You'll need your remote, some fast reflexes and a decent memory in order to answer questions about the film. It may well be a feature aimed squarely at the younger viewer, but I dare say that an "adult" may well need to be on hand in order to help answer some of the questions. Unfortunately, that doesn't mean that you'll be any good as Robin won't be welcoming me into his band of merry men any time soon.

Next up, the Backstage Disney section allows you to view the Robin Hood Gallery in two methods. You can either take the rather tedious option and browse through the entire gallery at your own pace, or take the more sensible option and watch it as a nine minute slideshow with some child friendly narration. Finally, no Disney DVD would be complete without a bit of Mickey and Minnie, so here they are in Ye Olden Days - a black a white cartoon from 1933 - that's over a whopping seventy years ago!

Although the transfer has been digitally cleansed - it's just a pity there was nothing showing the comparison - I think calling this disc a Special Edition is a bit on the over generous side. Sure, the presentation and packaging is up to the usual Disney standards, but the extras and the overall quality of the film are well below par. Robin Hood is also not one of the most famous of films to come from the studio - with not the best animation to be seen, and much of it copied from other Disney films. Produced on a tiny budget, and the first film produced after the death of Walt Disney, people weren't really sure what direction the studio would take, nor what people would think of the film. Fortunately, it did well at the box office and further releases over the years, along with Laserdisc and DVD releases, has ensured that Robin Hood has continued to fill the coffers of Disney. This release is bound to continue with that.

Given that the tale is based on an English legend, it seems odd that there weren't that many English actors providing the voices. Still, this is an American production for essentially an American market and, after the release of Mary Poppins, I'm sure most Americans thought that everyone in the United Kingdom spoke with a weird cockney accent anyway. However, whilst there is some English talent - with the likes Terry-Thomas, Brian Bedford (who?) and the late great Peter Ustinov, the rest of the cast sound like they're fresh from some sort of Western and leaving you with the distinct impression you're actually watching a cowboy film.

Robin Hood may not be the most memorable of Disney films, and it certainly wouldn't be anywhere near the top of my must own list, fans and collectors of the Disney DVD titles are still sure to enjoy it. However, unusually for a Disney title, it's not likely that it will keep children that occupied - if anything, the rather poor animation, slow pace, dull songs and rather poor storyline is not really going to appeal to small minds. I also suspect that the very child friendly extras are going to have little appeal too. One for the purists then.