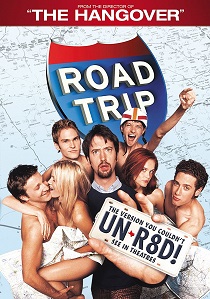 At the sleepy university of Ithaca student Josh is missing his long term girlfriend Tiffany who is studying at another university in Austin, Texas. Naturally, a long distance relationship is hard to keep going and Josh has his suspicions that Tiffany is seeing somebody else. Josh keeps ringing and sending her video messages but she fails to reply.

Josh has a fascination with a girl on his campus call Beth and finally one evening, believing his relationship with Tiffany to be over, he has a sexual encounter with her and as part of the passionate experience Beth video's their antics for prosperity. Unfortunately, there was a mix up in the mail and one of his buddies mails the wrong video to Tiffany.

Terrified of what his girlfriend is about to receive in the post, Josh recruits some of his buddies to hit the road and intercept the package in the best road trip ever. Naturally, things don't go to plan as cars explode, blind school buses are stolen and there's an incident with some French toast which will stop you complaining about anything in a restaurant again!

The picture is bright and colourful with an above average bit-rate throughout the film. However, it did tend to suffer from a fair amount of picture noise at times, although this only appeared to be a problem during the earlier part of the film. Fortunately, print damage is kept to a minimum and there's no signs of any print damage or other picture imperfections.

Again, to Dreamworks credit, they have managed to fit both a Dolby Digital and DTS soundtrack onto the disc. However, due to the nature of the film it is hard to recommend one soundtrack over another. The dialogue is well placed in the center channel although the rear channels appear to have been totally forgotten about, with very little appearing in the rears. There are a few LFE's, but they only tend to be used by the musical soundtrack.

The extras are interesting enough, with some Deleted Scenes and a funny, if brief, Making of presented by Tom Green. Also included is the usual Trailer, Production Notes and Cast and Crew Biographies. This "unrated version" is nothing more than some extra nude scenes at the beginning which were probably deleted to avoid an NC-17 rating and reduced takings at the box office.

If you liked American Pie and There's Something about Mary then you should definitely consider purchasing this film.