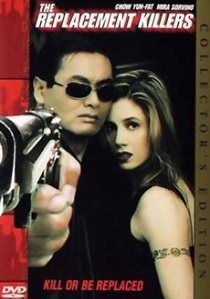 ReviewAdventure
Review Article Go back to homepage
In exchange for his family's safety in Beijing, a professional killer takes on a job from Mr. Wei, a ruthless underworld figure, to settle a deadly vendetta against a police officer who shot and killed his son. However, he can't go through with the job and goes on the run to return home to his family.
Yun-Fat Chow, Mira Sorvino, Michael Rooker, Kenneth Tsang, Jürgen Prochnow, Til Schweiger, Danny Trejo, Clifton Collins Jr., Carlos Gómez, Frank Medrano
Action/Adventure
2
1 Hour 24 Minutes
Thank you for supporting DVD365.net when you order using the link(s) below.
Buy DVD
Story

With the fanatic following of the Hong Kong action films and the explosive Hollywood career of Jackie Chan, it was only a matter of time until the mega-Hollywood bucks turned on Chow Yun-Fat (John Woo's Hard Boiled) and catapulted him into the Hollywood big time.

A prolific assassin is required to carry out a revenge shooting of a police officer who shot the crime bosses son during a drug raid. Poised to carry out the shooting, he cannot pull the trigger as he watches his prey through the telescopic sight of his rifle playing with his son Lee goes on the run and Mr. Wei never lets anyone leave his employment and hires replacement killers to track him down.

Whilst searching for a document forger to leave the country under a different identity he meets the beautiful Meg Coburn. With the killers, and their immense number of guns, on their tail they soon have to take a stand and fight back. So ensues a hail of bullets, explosions, bone crunching kung-fu, a kicking techo-beat and the final face-off between John Lee and Mr. Wei.

The picture is sharp and the sound is used effectively, especially during the numerous shoot outs, and with the excellent techo sound track it is easy to recommend.

This is an early disc from Columbia and has hardly any of the extras which we've come accustomed to with their newer releases. However, with this action-packed thriller firing on all cylinders, and the fact that we don't have to read the subtitles whilst the audio is in Mandarin, it is something which we can overlook this time.

This film is no different to any other Chow Yun-Fat film, and anyone who follows the Hong Kong action scene will be pleased with the extra budget which is spent wisely. John Woo's influence can be seen through the film with the usual slow motion action scenes, so long a trait of his, and indeed he is one of the executive producers.